US Losing Both Military, Intellectual Bases in World 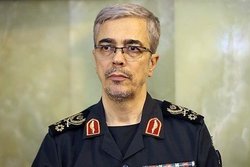 Chief of Staff of the Iranian Armed Forces Major General Mohammad Hossein Baqeri underlined that Washington has become so much hated in the world that it is losing both its military and intellectual bases.

RNA - "As the US is apparently thinking of decreasing its military bases in the world, it actually loses its intellectual bases among the world people one after another too," General Baqeri told reporters in Tehran on Tuesday on the sidelines of an exhibition of Basij (volunteer) forces' achievements.

According to Fars News Agency, he praised the Iranian experts and researchers for their military achievements, saying that the country has turned into one of the superior powers in defensive and missile fields.

In relevant remarks in May, Top Military Aide to the Iranian Supreme Leader Major General Yahya Rahim Safavi underlined that the US was forced to pull out military forces from West Asia after it failed to establish a footprint in the region.

"The Americans are forced to withdraw from West Asia because they are an oppressive government and cannot establish security in the region," General Rahim Safavi said.

"Iran has paid a high cost to establish security in West Asia in pursuit of peace in the region but the Americans, the British and the Zionists are considered as the main source of insecurity in the region and of course, most of their attempts are focused on selling weapons and looting the resources of the regional states," he added.

Rahim Safavi referred to the US hostile measures against Iran, and said Washington and its allies have sustained a defeat from Iran, Russia and the Lebanese Hezbollah resistance group in Syria and their Greater Middle-East Plan has fallen flat, and Iran has been able to thwart their plots in the region.