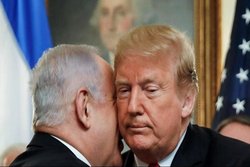 RNA - Tillerson stated that Netanyahu was “a bit Machiavellian” and cultivated relationships with world leaders he anticipated would be useful later, The Hill reported.

Tillerson added that Israeli officials would use misinformation if they believed it was necessary to win US officials over to their side of an issue.

“They did that with the president on a couple of occasions, to persuade him that ‘We’re the good guys, they’re the bad guys’. We later exposed it to the president so he understood, ‘You’ve been played’,” Tillerson said, adding, “It bothers me that an ally that’s that close and important to us would do that to us.”

Tillerson noted that when he first entered office he was optimistic about the potential for peace in the region.

“I did believe that we were at a moment in time where perhaps we could chart a way where the Arab world could support an outcome that the Palestinians might not think was perfect — and in the past, if it wasn’t perfect, it didn’t happen — but with enough encouragement, pressure from the Arab world, that we could get it close enough that the Palestinians would finally agree,” he told the panel.

But Tillerson stated that his lack of a relationship with Trump kept the State Department from making progress on this front during his time in office. Tillerson also conceded being “a little too aggressive” in a push to overhaul the department.

“The level of change was so dramatic for a lot of people in what was already a very significant change from the Barack Obama administration to the Trump administration, which was also dramatic and traumatic,” he said, adding, “I didn’t have a full appreciation probably for just how emotional it would become for some people.”

Tillerson left office in March 2018 and has made mild criticisms of Trump since then, prompting the president to call him “dumb as a rock” and “lazy as hell” in December 2018.