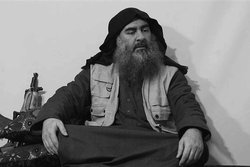 RNA - The Arabic-language TV network Al-Alam reported that al-Baghdadi in his message has asserted that after five years since its establishment, the ISIL is still active and continues its operation.

The ISIL ringleader reiterated that the ISIL will welcome the militants who would join the terrorist organization.

“The ISIL terrorists in a war of attrition has targeted 11 countries while conducting 63 military operations in three days and hitting targets in 10 provinces,” al-Baghdadi said.

The ISIL ringleader also warned the US troops and their allies in Mali, Niger, Yemen, Tunisia, Libya and Asian regions that they will face a fate similar to the US troops in Iraq, Afghanistan and Syria.

Al-Baghdadi’s audio message comes while the self-proclaimed caliphate of the ISIL that declared existence in 2014 is gone and its militants are fleeing in Iraqi and Syrian deserts.

In a relevant development earlier in September, a relative of al-Baghdadi said that the ISIL ringleader has recently admitted extensive differences among the terrorist group’s commanders, acknowledging that he has lost his position.

The Arabic-language al-Qaza newspaper quoted Ibrahim Ali al-Badri, al-Baghdadi's cousin, as saying that in his latest meeting with the ISIL leader, he admitted that all of his aides have rebelled against him and differences among high ranks have gone so wide that the Arab and foreign commanders are plotting a coup now.

The cousin has confessed to the Iraqi judiciary officials that al-Baghdadi's bodyguard has transferred him from al-Sha'afah region in Eastern Deir Ezzur to an area 10 to 15 minutes away which hosted the ISIL ringleader's nearly 150-square-meter hideout.

Al-Badri added that al-Baghdadi has started developing wrath at the Tunisian and Saudi members of the ISIL for sowing discord among the terrorists and for their extremist behavior, and disclosed that the ISIL ringleader is sufferring acute illness and his left ear had also undergone surgerical operations in Albu Kamal region in Syria.

Earlier, Head of the Iraqi parliament's Security Committee Sadeq al-Hosseini had said that the ISIL had lost 13 of its emirs (senior commanders) and is now facing a vacuum in the leadership.

Relevant reports said last month that al-Baghdadi had chosen one of the Iraqi commanders of the terrorist group in Mosul as his successor.

The Arabic-language Baghdad al-Youm news website affiliated to the ISIL quoted Fazel Abu Raqif, an Iraqi security expert, as saying that Abdollah Qardash, one of the inmates in Bouka prison near the town of Um al-Qasr in Iraq, which was protected by the US, and the Mufti of al-Qaeda, was adopted as al-Baghdadi's successor.

He added that Qardash was one of the dangerous commanders close to Baghdadi, noting that he was the first person who joined the ISIL leader after Mosul's collapse.

His remarks came as reports said late in July that al-Baghdadi was hiding in Syria after he was paralyzed in Iraq’s recent anti-terror operations.

“Al-Baghdadi together with a number of his Arab and foreign aides are presently in Syria as he is feeling too much danger after several ISIL commanders were killed in Iraqi Army’s military operations on ISIL’s hideouts in Western Iraq,” Head of Iraq’s Intelligence Forces Abu Ali al-Basri told the Arabic-language al-Sabah newspaper.

He noted that al-Baghdadi was taken a defensive position under threat by Iraq’s intelligence forces, escaping battle with the Syrian and Iraqi armies.

Al-Basri noted that al-Baghdadi was still very much popular among his foreign, Arab and Iraqi militants, and said that the ISIL ringleader is now replacing some his commanders after he lost a number of his militants and aides in a joint military operation by the Iraqi intelligence forces and the Syrian Army.

He reiterated that al-Baghdadi had been paralyzed after he sustained a spinal cord injury in the Iraqi forces’ attack on a meeting between him and his aides in al-Hojin region before the ISIL left the region in 2018.