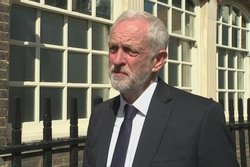 One year on since the Labour Party’s full adoption of the International Holocaust Remembrance Alliance Definition of Anti-Semitism, pro-Palestine members of the Labour Party are being cracked down on harder than ever.

RNA - Labour anti-Semitism has been headline News in Britain, with left-wing human rights campaigners being demonized and painted in British media as being vile anti-Semites, effectively isolating pro-Palestinian voices, many of those voices Jewish voices.

In the opinions of those affected, the Labour Party has essentially been steered away from its central domestic issues, due to a right-wing element within the party, which seeks to remove Jeremy Corbyn from his position as Labour leader.

But how far will the party’s right-wing go, siding with those who push an anti-Palestinian narrative, in order to combat Corbyn and fellow champions of Palestinian human rights. Will free speech in the United Kingdom, on Israeli crimes and policies, mean that your career, image and even life will continue to be put in danger?

British PM accuses Iran of being behind Saudi oil attacks

Blair claims that Johnson can "succeed" in snap general election

British authorities expect huge protests in the run-up to Brexit