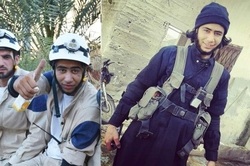 International Human Rights Commissioner in the Middle East Haitham Abu Saeed disclosed that the West has provided the pro-militant White Helmets with chemical weapons to be used against Syrian civilians.

RNA - Abu Saeed told the Arabic-language website of Russian Sputnik news agency that in a preliminary report published by the international fact-finding committee probing into the use of chemical weapons in Syria, it was mentioned that the Syrian government had no chemical weapons at its disposal and that it had handed over all its chemical reserves to the US Army and the international community.

He noted that when he and another members of the fact-finding committee went to Syria for further investigations they realized that some parts of the reserves had been returned to Syria and delivered to non-governmental organizations such as the White Helmets.

Abu Saeed noted that the White Helmets played a negative role in Syria and forged truth, news and films, and said, “We discovered this and sent it to international institutions, but they exerted pressure on us to stop our investigations.”

The White Helmets as a terrorist group have played crucial role in supporting terrorists since 2013. The group is financially supported by the UK and the US under the cover of helping the civilians in Syria.

In relevant remarks in August, Russian Special Presidential Representative for Syria Alexander Lavrentyev said that members of the White Helmets should face trial over their criminal activities.

"Those people are criminals. They provoke, generally speaking, world powers to stoke confrontation among themselves and to detonate tensions," Lavrentyev stated in an interview with TASS.

"Eventually, they should be brought accountable. I think that each of them will face trial sooner or later," he noted, adding, "I believe that the work should get started. They should be disclosed and evidence of their criminal activities should be collected. There is already lots of evidence."

Commenting on an item in the joint statement of the guarantor states (Russia, Turkey and Iran) ensuring security of the civilians in Idlib, Lavrentyev underscored that "the Russian side has always been guided [by the principle] that the civilian population must not suffer".

"I would like to stress once more that all the Russian airstrikes are checked several times through various sources. Only afterwards, provided that there are no preconditions civilians can suffer, they are conducted. They are conducted only against militants and ammo depots," he stated.