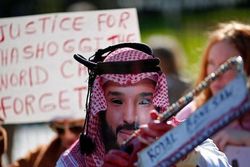 This is disgraceful, but it is happening, although the United Nations is under growing pressure to scrap a disturbing event it is co-hosting with the private foundation of Saudi Arabia’s crown prince Mohammad bin Salman, who has been linked to the gruesome killing of journalist Jamal Khashoggi.

RNA - The UN should cancel the September 23 event, as it would help repair bin Salman’s reputation over the Khashoggi murder. The event, known as the Misk-OSGEY Youth Forum, is a partnership between the UN’s youth envoy, Jayathma Wickramanayake, and the Misk Foundation, a culture and education foundation chaired by bin Salman, who is better known as MBS.

No one - especially not the UN - should ever be partnering with MBS or his personal Misk Foundation. Saudi Arabia’s brutal crown prince is responsible for the deaths of thousands of Yemeni children. His thugs imprisoned leading women’s rights activists and murdered Jamal Khashoggi.

Which is to say the world body is helping to whitewash MBS’s criminal record. This is disturbing. Why is the UN helping the Saudi crown prince whitewash his record by co-hosting a conference with a foundation he leads just a year after the murder of Jamal Khashoggi?

The Misk-OSGEY Youth Forum will take place in New York only 10 days before the first anniversary of Khashoggi’s murder on October 2 last year, when Saudi government agents killed and dismembered the journalist inside the country’s consulate in Istanbul. The CIA later determined that MBS had personally ordered the hit. Saudi officials, who initially said Khashoggi had left the consulate alive, now say the journalist was killed in a rogue operation that did not involve MBS.

The workshop for 300 young people at the New York Public Library will occur on the sidelines of the UN General Assembly and promote green themes, corporate responsibility and other aspects of the UN’s Sustainable Development Goal (SDG) agenda.

According to Fars News Agancy, Khashoggi, a United States-based journalist who frequently criticized the Saudi government, was killed while visiting the Saudi consulate in Istanbul, where he was collecting papers for his wedding. UN expert Agnes Callamard issued a report in June that described the assassination as a “deliberate, premeditated execution,” and called for MBS and other Saudi officials to be probed.

This killing was a result of an elaborate mission involving extensive coordination and significant human and financial resources. It was overseen, planned, and endorsed by high level officials and it was premeditated. The right to life is a right at the core of international human rights protection. If the international community ignores targeted killing designed to silence peaceful expression, it puts at risk the protection on which all human rights depend.

Since it occurred at a consulate in Turkey, the killing cannot be considered a “domestic matter” and violates the Vienna Convention on Consular Relations as well as the prohibition against extraterritorial use of force in times of peace, making it an international crime.

The Misk-OSGEY Youth Forum also comes after years of tensions between the UN and Riyadh over the illegal war on Yemen, where Saudi Arabia is leading a military coalition against the country’s Houthi Ansarullah and besieged population - although the coalition is unraveling as Saudi and UAE-backed forces have been killing each other in a new war front that has seen the militants supported by the two coalition members at war with each other.

The conflict has killed tens of thousands of people and led to a major humanitarian crisis. The crown prince and his violent regime must be held accountable for their human rights crimes. Instead, misguided UN staff are absurdly giving the crown prince a public relations platform as he attempts to wipe away the blood of so many dead Yemeni children. And we have not even started to talk about the poor several-million-strong Shiite population in the Eastern part of Saudi Arabia who are getting killed, hanged and chopped up by the MBS Wahhabi regime whose so-called understanding of Islam has parented the Al-Qaeda and ISIL, believing that everyone, except for the Wahhabis, should be wiped off the earth.