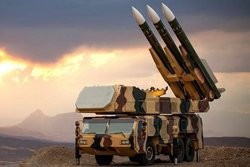 Iranian Deputy Defense Minister Brigadier General Qassem Taqizadeh said that his country has produced highly accurate missiles which have not been displayed to the public, adding that the range of Iran's missiles are for the time being limited to 1,800km.

RNA - "We make missiles appropriate to the threats and for the time being, we know that threats against us are in a maximum range of 1,800km away, but we have increased their precision-striking power; the time when we manufactured Shahab 1 missile is gone; today, we produce highly accurate missiles which have not been displayed to the media," General Taqizadeh said in an interview with the Persian-language service of the SNN on Friday.

He, meantime, said that Iran does not seek war against any country "but if anyone intends to make aggression, we will give a strong response".

According to Fars News Agancy, General Taqizadeh underlined that the Americans fear war against Iran as they are aware that thousands of their military forces in the region are within the range of Iranian fire.

In relevant remarks early in July, Commander of the Iranian Army's Khatam ol-Anbiya Air Defense Base Brigadier General Alireza Sabahi Fard pledged to hand the enemies the harshest response in case of any hostile move against the country, saying that Iran was in possession of secret weapons to be used in 'rainy days'.

"Our deterrence and secret weapons have stopped the filthy enemy 200 miles away (from the Iranian borders) in the Strait of Hormuz," General Sabahi Fard said, addressing a forum in Tehran.

"The enemy knows very well that it should not go for testing Iran's combat capability as its first mistake will be its last," he added.

Sabahi Fard said enemies were exerting maximum pressure, used the most hostile rhetoric against Iran and havd widened their military buildup in the region to intimidate the Iranian nation into holding talks with the US, but only in vain.