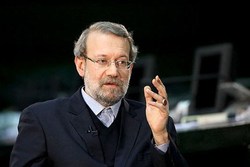 Iranian Parliament Speaker Ali Larijani felicitated Hezbollah resistance group and the Lebanese nation on the anniversary of their victory over Israel in the 33-day war, stressing Tehran's continued support for the resistance front.

In his messages, Larijani referred to breaking the Israeli occupiers' hegemony during the thirty-three-day war, saying the victory was the result of Resistance leadership, sacrifice and Jihad of the Hezbollah forces.

It proved that the Zionism's invincibility was nothing but a legend, he added.

He underlined Iran's readiness to support Resistance against the Zionist regime of Israel.

The sinister plots of the Zionists to disintegrate Islamic states failed, he said, adding that the Deal of Century will never be able to materialize Zionists' aggressive ambitions.

His comments came after Commander of the Islamic Revolution Guards Corps (IRGC) Major General Hossein Salami underscored Hezbollah resistance group's capability to defeat and destroy Israel in any possible war using its own potentials and without any need to foreign assistance.

"They (the US and its allies) intended to undermine Iran's regional influence, but everyone witnessed how this policy backfired to increase Iran's influence and a united front was formed against the Zionist regime, and the Lebanese Hezbollah has now developed such an extent of power through the experience of confrontation against proxy wars that it is now able to wipe the Zionist regime off the map in any possible war by itself," General Salami said, addressing a ceremony in the Northwestern city of Urumiyeh on Wednesday.

He also referred to the formation of popular resistance forces in Iraq and Yemen, said, "The popular forces in Yemen defeated the powerful US military system, which is indicative of enemies' wrong policy towards Iran."

Iran not seeking war, but to give ‘crushing’ response to any aggression

Hezbollah chief voices solidarity with Iran’s Zarif over US sanctions

US Offer for Talks with Iran Nothing but Deception