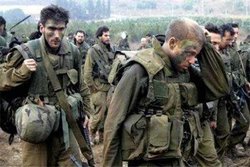 A new report criticized foreigners' enlistment in the Israeli military, raising alarm at the spike in the number of lone soldiers committing suicide.

RNA - The Israeli newspaper Haaretz reported on Saturday that close to 3,500 lone soldiers without immediate family in the occupied territories are serving in the Israeli army.

About 1,200 of them come from North America, a similar number from the former Soviet Union and the remainder from other countries

Foreigners make up a minor percent of Israeli army personnel, but the suicide rate is high among them, according to the report.

"Although soldiers whose parents do not live in Israel comprise only 2 percent of all recruits to the IDF (the Israeli army), they accounted for a disproportionately high share of military suicides in the past year," the daily said.

In 2018, the number of overall suicides in the Israeli army dropped by nearly half to nine, compared with the previous year. However among those nine suicides, two were lone soldiers.

In the first six months of 2019, there were another two self-murders by lone soldiers, with a third death under investigation as a possible suicide.

Last week, Major General Moti Almoz, head of the Israeli army's manpower directorate, sent out a letter to all senior commanders with the following subject headline, “Preventing suicide in the IDF”, including a part referring specifically to lone soldiers.

A Haaretz investigation revealed failings in the lone soldier program, adding that the program continues to be nurtured and encouraged because so many fundraising organizations and regime-funded initiatives have a vested interest in keeping it going.

"By the time many of them join the army, it is often too late to address their problems. It shows that Israel does not undertake adequate background checks before putting these young men and women in harm’s way; that many of the young recruits do not sufficiently comprehend what military life in Israel entails; that large numbers lack the proficiency in Hebrew and familiarity with Israeli culture required for successful adaptation; and that many see the army as a form of escape from difficulties and challenges they face back home," according to the report.

A former high-ranking officer, who had close interaction with many of lone soldiers, stated there are problems is the vetting system, noting, “The holes in the filter are way too big."

Arthur Lenk, ex-Israeli ambassador to South Africa and a former lone soldier himself, stressed that in addition to serious holes in the vetting system, foreign volunteers lack information about the army.

“The IDF is not the French Foreign Legion. We are not a volunteer army, nor need we be in 2019,” he said, adding, “We draft lots of our own kids, and there’s no reason we should be taking in mercenaries.”

A., a former lone soldier from Canada, admitted that he had lied about his history of opioid abuse when he joined the Israeli army.

"They just asked if I took drugs in the past and I said that I hadn’t,” he said, adding, “The army didn’t even ask if my parents knew I was enlisting, or try to contact them."

Shifra Shahar, CEO of A Warm Home for Every Soldier NGO, described Machal, a shorter volunteer service, as "totally irrelevant and unnecessary in this day and age".

“Most of them (lone soldiers) come here to escape problems back home. They can’t find work, they have no inclination to study, they’re the black sheep of their families. Many come from broken homes. Some even have criminal records. And someone out there has somehow succeeded in convincing them or their parents that the Israeli army will straighten them out. Unfortunately, in most cases the army only aggravates whatever problems they already have," she stated.

Yagil Levy, a political sociology and public policy professor at the Open University of Israel, said he did not anticipate any major rethinking of the lone soldier project despite its problems.

“There is definitely a big interest on the part of Diaspora Jewry — especially in the United States – in keeping it going as part of the greater Zionist project,” he added.