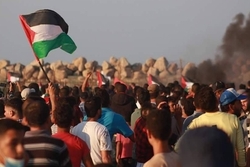 Israeli forces have attacked Palestinian protesters gathering at the fence between the besieged Gaza Strip and the occupied territories, leaving more than 70 people injured.

Palestinians have been holding weekly rallies in the area since last year to protest the siege on Gaza and stress the right to return of the refugees who have fled Israeli aggression since 1948.