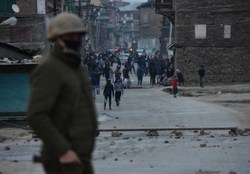 Tension over Kashmir is growing rapidly with Pakistanis, Kashmiris and Indians reacting all around the world.

Kashmir is a very sensitive topic and can very easily inflame tensions between the opposing sides. Both Pakistanis and Indians seem prepared to do almost anything to defend their interests, while Kashmiris are left caught in the middle.

Protesters were eager to vent their frustrations to the media, over what they called crimes being committed by Indian forces in Kashmir.

Tensions have been running high between India and Pakistan since New Delhi decided to revoke the autonomy of Kashmir. This came along with a communications blackout and movement restrictions. The move angered officials in Pakistan.

So far, Pakistan has sought political means to deal with the escalation, however, with reports of military clashes between Pakistani and Indian forces, the likelihood of this escalation turning into a new conflict over Kashmir seems like a real possibility.

Pakistan’s PM vows to respond to any aggression in Kashmir