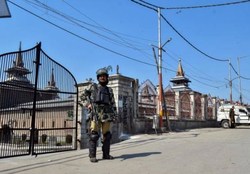 RNA - While Indian security forces kept disputed Kashmir's biggest city of Srinagar largely locked down to prevent any major protests against a decision that scrapped the Himalayan region's special rights, Pakistan dedicated its Eid prayers to the people of Kashmir.

Frustration is growing in Muslim-majority Kashmir, which is also claimed by Pakistan, over India's move last week to curtail autonomy for the state of Jammu and Kashmir, including a bar on non-residents buying property.

Pakistan's army chief, General Qamar Javed Bajwa, visited the Line of Control in the Bagh sector, to spend Eid with troops on the front lines. Pakistan, including the Armed Forces, is observing Eid solemnly in solidarity with Kashmiris on the other side of the Line of Control.

Meanwhile, in Kashmir's main city, Srinagar, police and troops, many wearing heavy riot gear, dotted silent streets where checkpoints had been added around midnight, with more concertina wire laid out to create barricades.

Inspector General of Police, Jammu and Kashmir, Swayam Prakash Pani told reporters that prayers were held peacefully barring a number of incidents where people were injured.

Eid al-Adha or the "festival of sacrifice" is celebrated each year on the 10th day of the 12th and last month of the lunar Islamic calendar.