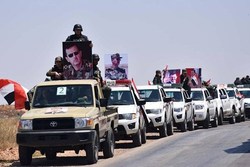 The Damascus Army continued its military operations in Northern Syria, regaining control of a strategic region and the nearby hills in Southern Idlib.

RNA - The army forces, backed by artillery and missile fire, engaged in heavy clashes with Tahrir al-Sham al-Hay’at (the Levant Liberation Board or the Al-Nusra Front) terrorists in the town of al-Tamane'ah in the Eastern parts of Khan Sheikhoun on Saturday, taking back control of the strategic town of Sakik and adjacent hills.

The Syrian army continued military operations in Northern Syria, regaining control of a strategic region and the nearby hills in Southern Idlib.

The army forces, backed by artillery and missile fire, engaged in heavy clashes with Tahrir al-Sham al-Hay’at terrorists in the town of al-Tamane'ah in the Eastern parts of Khan Sheikhoun on Saturday, taking back control of the strategic town of Sakik and adjacent hills.

Meantime, a field source said that other Syrian army troops also clashed with militants in al-Latamineh and al-Hobait in Western Khan Sheikhoun in Southern Idlib, adding that the army intended to surround the terrorists in Southern Idlib and facilitate the operations in Idlib and Hama by launching concurrent operations in several fronts, driving wedges to separate the region into several parts and cutting the militants' supply lines.

He added that the Syrian army has also dispatched a large number of forces and military equipment to Atshan, Abuda Ali and Abu Omar in Eastern Hama and Southern Idlib.

A new US military convoy comprising hundreds of trucks carrying military equipment has arrived in areas under the control of the Kurdish militias in Eastern Syria, media reports said Saturday.

The Arabic-language website of the Russian Sputnik news agency quoted Kurdish sources in Qameshli, Hasaka as saying that over 200 trucks carrying weapons, military and logistics equipment of the US-led coalition have entered Qameshli via Simalka crossing.

According to Fars News Agancy, the Kurdish sources said that the US military convoy is planned to be distributed among SDF militia in Eastern Syria.

The dispatch of new US military convoy for the SDF comes as the Turkish Army has sent massive military equipment for imminent military operations against the Kurdish militias in Eastern Syria and behind Turkey's borders with Syria.

People in areas under the control of the Syrian Democratic Forces in Eastern Hasaka are widening protests against the SDF as tensions heighten in the region, the Arabic-language media outlets said.

“Residents in the town of Nas Tel in Tal Barak region in Eastern Hasaka held protest rallies against the SDF in Eastern Hasaka on Friday,” the Arabic-language website of Sputnik news agency quoted local sources as saying.

They also said that the citizens closed the road linking Tal Barak town to Qameshli and called for immediate release of civilians in protest at SDF’s abduction of civilians and their forced recruitment as soldiers.

“The wave of arrests of civilians by the SDF in Tal Tamr, Ra’as al-Ain, Tal Barak, Tal Hamis and al-Shadadi in Hasaka and also in Eastern Deir Ezzur has considerably increased,” the sources said.

Popular protests against the SDF have recently increased in Deir Ezzur, Hasaka and Raqqa as the Kurdish militia have monopolized crude oil, abducted and tortured civilians causing spread of insecurities in areas under their control and enraging the public.