Syrian Army Close to Terrorists' Key Base in Idlib Province 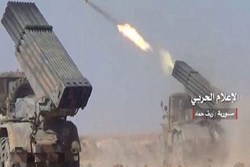 The Damascus Army continued its military operations in Northern Hama, regaining control of several regions and reaching the strategic town of al-Habit in the Southern part of Idlib province.

The army forces gained control over the town of al-Jaisat in Northern Hama near the border with Idlib province and approached the town of al-Habit in Southern Idlib.

The Syrian army forces continued military operations in Northern Hama, regaining control of several regions and reaching the strategic town of al-Habit in the Southern part of Idlib province.

Meantime, the London-based Syrian Observatory for Human Rights (SOHR) reported that the army forces have gained control over the town of al-Jaisat in Northern Hama near the border with Idlib province, adding that they have approached the town of al-Habit in Southern Idlib, one of the terrorists' strategic bases.

The Syrian army destroyed a military convoy of Tahrir al-Sham al-Hay'at (the Levant Liberation Board or the Al-Nusra Front) terrorists in Northern Hama after operations to regain control of the militants' main base in the 'death triangle'.

A Syrian military source reported on Thursday that the army forces had cut the main supply route of Tahrir al-Sham and Jeish al-Izza from the town of Kafar Zita to al-Latamineh in Northern Hama which is their main base in the death triangle, after liberating the towns of al-Arbaeen and al-Zakat.

According to Fars News Agancy, he added that the Syrian army is trying to advance towards the town of Kafar Zita, noting that several towns and villages, including al-Latamineh, will collapse militarily after the army's control over the region.

Meantime, the Arabic-language al-Watan newspaper quoted a field source as saying that the Syrian army had targeted the military convoys of Tahrir al-Sham which were moving towards the fronts in Northern Hama to retake the lost areas, with artillery and missile fire, killing tens of terrorists.

He added that the Syrian air force also pounded the terrorists' positions in Khan Sheikhoun, Abedin, Jabal Shahshabou, Madaya and al-Habit in Southern Idlib, destroying several positions of the so-called National Liberation Front and killing a large number of them.

Hundreds of children are present among the US-backed Syrian Democratic Forces (SDF) despite an agreement with the UN not to recruit child soldiers.

The Arabic-language al-Arabi al-Jadid news website quoted sources close to the SDF as saying that the SDF has still maintained hundreds of under-18 children in its military bases.

They added that family members of these children are angry with the SDF for using them in battleground, noting that the SDF issued a statement after popular and media protests, saying that hundreds of child recruits were freed from bases in Eastern Euphrates in Northeastern Syria.