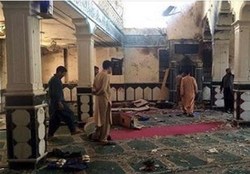 At least 14 people have been killed and more than 140 wounded after a Taliban suicide attack outside a police station in the Afghanistan capital of Kabul.

RNA - The blast occurred in Western Kabul on Wednesday, Interior Ministry Spokesperson Nasrat Rahimi said before adding that the bomb went off when a vehicle was stopped at a checkpoint outside the station, Al-Jazeera reported.

The Taliban claimed responsibility for the attack.

The explosion sent a massive plume of smoke over the Afghanistan capital.

According to videos on social media and witnesses, small arms fire could be heard following the blast.

The attack came a day after the Taliban called for the boycott of a presidential election scheduled to take place on September 28 and threatened to attack election rallies.

The Taliban, who have been staging near-daily attacks across the country, usually target Afghan forces and government officials or those seen as loyal to the government.

On Tuesday, a bomb targeting a van carrying employees of the Interior Ministry's counter-narcotics division killed five people and wounded seven in Kabul.

US officials and the Taliban met in Qatar's capital Doha this week for the eighth round of talks aimed at striking a peace deal that would slash the American military presence in Afghanistan.

Despite negotiations, the fighting has not subsided, as the civilian casualty rates across Afghanistan jumped back to record levels last month.

According to the United Nations, more than 1,500 civilians were killed or wounded in the Afghan conflict in July alone, the highest monthly casualties so far this year and the worst single month since May 2017.