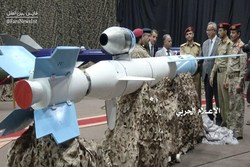 Once again Ansarullah movement has carried out a preemptive strike on a Saudi base. This time they have hit Al-Nustahdath military camp in Alsaqam region of Najran province.

RNA - In the previous retaliatory operation on Thursday, the Ansarullah fighters carried out two attacks against Saudi positions. One targeted a parade at a UAE's support and training camp in Al-burigah which left 39 soldiers dead and dozens of others injured. Another one hit a base in the Saudi region of Al-damam.

In a press conference on Friday, the spokesperson of Ansarullah movement said that a new domestically middle range missile has been used for the first time in the latest retaliatory attacks. Such weapon Aziz Rash said will open a new chapter in the retaliatory operations.

According to Press TV, Yemeni forces have carried out 60 drone operations against Saudi targets over the past three months. They see the retaliatory attacks as the only way to end nearly five years of death and destruction that have left over 16 thousand civilians dead in the impoverished country.

The imposed war has also taken a heavy toll on the country’s infrastructure, destroying hospitals, schools, and factories.

The Saudi-led military campaign has also paved the way for the outbreak of epidemics, most notably cholera, in the impoverished country.

The UN has warned that the situation in war-ravaged Yemen is further deteriorating as the Arab country is facing the biggest humanitarian crisis in the world.