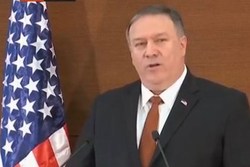 Iran’s foreign minister has dismissed his American counterpart’s “empty and disingenuous” offers to visit Iran and have an interview with the country’s state TV, daring him to accept any of the many interview requests from Iranian reporters.

RNA - “Instead of making empty and disingenuous offers, Secretary [Mike] Pompeo can accept any of the many requests from Iranian reporters to interview US officials,” Zarif tweeted Wednesday.

“He has refused till now, as he knows he has to be accountable to rigorous questioning—the very same way I am by the US media,” he added.

Zarif suggested the US secretary of state does not dare to have an interview with Iranian reporters because they will ask him “to explain why he—& his boss: Call Iran a terrorist nation; Distort historical name of PERSIAN GULF to grovel to client regimes; Distort even the BIBLE to kowtow to a #B_Team member; Employ Economic Terrorism against entire Iranian people; and....”

@SecPompeo will then have to explain why he—& his boss:
Call Iran a terrorist nation;
Distort historical name of PERSIAN GULF to grovel to client regimes;
Distort even the BIBLE to kowtow to a #B_Team member;
Employ #EconomicTerrorism against entire Iranian people; and ...
— Javad Zarif (@JZarif) July 31, 2019

The Iranian foreign minister’s comments came in reaction to Pompeo’s offer to visit Iran and go on the Iranian television and speak directly to the Iranian nation, which he calls a “terrorist nation.”

Asked if he would be willing to go to Tehran, Pompeo said in a July 25 interview with Bloomberg TV, “Sure. If that’s the call, I’d happily go there... I would welcome the chance to speak directly to the Iranian people.”

Pompeo said he would accept any offer to go on Iranian television as Zarif Iran has appeared on US television.

...@trtworld, or any other such media outlet. My English is not perfect & I've never done an interview before, but I know enough about Iran & I've been on TV enough to feel confident that I won't disappoint too much. If @SecPompeo is serious he should accept. I'm waiting.
— Seyed Mohammad Marandi (@s_m_marandi) July 30, 2019

Shortly after his offer, Ali Rabiei, the spokesman for the Iranian administration, said that if Pompeo is willing to talk to Iranian reporters, he can have an interview with Press TV correspondent and anchor, Marziyeh Hashemi, who was detained by the US government on baseless grounds during a visit to meet with her family in the United States earlier this year.

“Pompeo has said that he is willing to talk to Iranian reporters. We say that we have Ms. Marziyeh Hashemi, who can talk to him and we are not going to avoid this issue,” he added.

Pompeo’s comments came after Zarif was interviewed by US media during his visit to New York for a United Nation miniterial conference on sustainable development goals. Pompeo signed off on a visa for Zarif’s visit but restricted his travel “in a manner that is fully consistent” with US obligations under the UN agreement.

Poll: Half of Voters Say Trump Is Racist