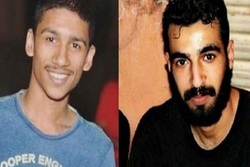 Four days after Bahraini embassy staff in London allegedly tried to throw a protester off the embassy roof, the Foreign and Commonwealth Office (FCO) has yet to comment on the incident.

RNA - There were angry protests outside the Bahraini embassy in London on July 26, prompted by the imminent execution of two activists.

The event climaxed after a protester, one Moosa Abd-Ali, climbed onto the roof of the embassy and was intercepted there by embassy staff who allegedly tried to throw him off the roof.

The event was live streamed and prominently tweeted by British-Iranian journalist, Nargess Moballeghi.

Wider media coverage, notably by the online newspaper Independent, identified the protester as “Moosa Mohamed”, and reported that he had unfurled a banner reading: “I am risking my life to save two men about to be executed in the next few hours. Boris Johnson act now!”

Whilst the police eventually stormed the building to save Abd-Ali’s life, however instead of taking action against embassy staff they ended up arresting Abd-Ali for alleged trespass.

Abd-Ali’s dramatic protest proved fruitless as the two activists, Ali al-Arab and Ahmed al-Malali, were executed by the Bahraini authorities the following morning.

According to Press TV, Hitherto, the dramatic events at the Bahraini embassy and the alleged  attempted murder by embassy staff, has not elicited any reaction from the British government, let alone a condemnation.

This is not the first time that Bahraini embassy staff in London have tried to harm protesters and got away with it. In 2017, Bahraini embassy employees were accused of throwing hot water on demonstrators from a balcony.

The FCO's failure to admonish Bahrain for this potentially criminal behavior on British soil is entirely in keeping with the British government’s policy of supporting the ruling Al-Khalifa dynasty.

A 2017 report by the human rights organization “Reprieve” revealed that the FCO had paid for six Bahraini police officers to visit Belfast in August 2015 for “public order” training.

the Guardian reported in August 2016 that the UK’s College of Policing had a contract with Bahrain’s Ministry of Interior to train Bahrain’s police forces.