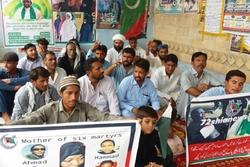 Members of Pakistan’s Majlis Wahdat-e-Muslimeen (MWM) held a protest in support of ‎Shaykh Ibrahim Zakzaky, the leader of the Islamic Movement of Nigeria (IMN), in ‎‎Jacobabad, Sindh, Pakistan‎.‎

RNA – Speaking at a protest in support of Shaykh Ibrahim Zakzaky, the leader of the ‎Islamic Movement of Nigeria (IMN), in Jacobabad, Pakistan, Allamah Maqsood Ali Domki, ‎the leader of the Majlis Wahdat-e-Muslimeen (MWM), condemned the ongoing brutality ‎against the members of this revolutionary movement in Nigeria and said, “The world must ‎take notice of the ongoing humanitarian atrocities in Nigeria because the manner in which the ‎Buhari government has massacred innocent people and opened fire on peaceful citizens is an ‎affront to humanity.”‎

His Eminence said that supporting Shaykh Zakzaky is a duty and a debt to humanity. This ‎duty is the reason that millions if people throughout the world have gathered in protest ‎against the injustice against Shaykh Zakzaky and his followers and added, “Millions of ‎people, from London, New York to Indonesia to Pakistan have been involved in protests in ‎support of this true follower of Bilal ibn Rabah [the Abyssinian muezzin and companion of ‎the Prophet Muhammad].” ‎

Allamah Domki stressed, “Shaykh Zakzaky is now a leader at a global level and is not just ‎the leader of a single group in one country. The conscience of the people of the world will ‎respond to the oppression perpetrated against the Zakzaky ‎family and their companions ‎with every drop of their blood.” ‎

He added that just a few days ago, the Nigerian police once again attacked peaceful ‎protestors in Abuja and exposed the face of the Yazids and Hurmalahs of the present-day to ‎the world. ‎