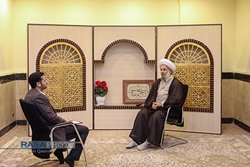 Hujjat al-Islam Bonyadi ‎considered Rasa News Agency’s entrance into internal and external ‎issues of the Islamic Seminaries as timely and added that its activities provide an accurate ‎insight into the present, past and future.‎

RNA – Speaking during a visit to the headquarters of Rasa News Agency in Qom, Hujjat al-‎Islam Hoseyn Bonyadi, the vice-chairman of the General Assembly of the Society of ‎‎Seminary Teachers of Qom, ‎praised the performance and activities of this seminary media ‎organization and said, “It’s honour to be present at the active and honourable Rasa News ‎Agency.”‎

He continued, “Rasa News Agency has been well-versed in different dimensions and angles of ‎the Islamic Seminaries with proper insight, timeliness and attitude towards the present, past ‎and future and a bright future is expected due to the activities of this news agency.”‎
‎ ‎
Hujjat al-Islam Bonyadi said that there have been many statements made in the Islamic ‎Seminaries ‎and media and added, “Rasa News Agency has played a significant role in ‎addressing the news of the sources of emulations, the seminary institutions and centres both ‎within the seminary and issues related to society and the Islamic system of government.”‎

His Eminence added, “Rasa News Agency takes various aspects into consideration when ‎addressing issues. The media is interwoven with the arts and therefore, when entering into ‎any subject, if attraction and are the arts are combined, the news can be better and more ‎acceptable for both seminarians and non-seminarians.” ‎

In the end, he offered his appreciation to Rasa News Agency for its activities and also ‎thanked those involved and the reporters of this news agency and expressed his hope that ‎they will be more successful on this path of serving the Islamic Seminaries‎.‎

It should be stated that Rasa News Agency was established in 2003 by a group of scholars ‎and researchers from the Islamic Seminary of Qom with the aim of promoting the discourse ‎of ‎the Islamic Revolution‎ and establishing better communication between ‎society and the ‎Islamic Seminaries.‎