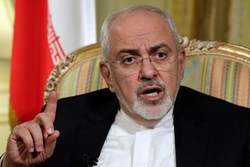 Iranian Foreign Minister Mohammad Javad Zarif has slammed the United States for what he has termed as its “modern wave of adventurism,” saying the policy is a serious threat to the global peace.

RNA - Addressing a meeting of top diplomats from the Non-Aligned Movement in Caracas, Venezuela, on Saturday, Zarif said Washington's modern wave of extremist, unilateral adventurism is the most significant challenge that almost all countries around the world are facing in a way or another.

Zarif made the remarks in a clear reference to a raft of tough economic sanctions imposed by the US on countries like Iran and Venezuela over the past months.

The oil-exporting countries have been deprived of much of their normal revenues as the US President Donald Trump continues to press buyers around the world to cut their crude imports from the two states to zero.

Coupled with punitive economic measures against countries like China and Russia and others in the European Union, the sanctions have represented a growing inclination toward unilateralism in the White House while prompting massive criticism around the world.

According to Press TV, Zarif said such unilateral and protectionist view to the international affairs has posed a real threat to the global peace and stability .

A Persian translation of his remarks provided by the official IRNA agency said that the challenge posed by new US policies is weakening the governance of law at the international level while threatening the global peace and stability in various ways.

Zarif cited a decision by Trump in May last year to pull out of a 2015 agreement on Iran nuclear activities as a main example of Washington’s recklessness for international law.

“The US administration is defeating the Iran nuclear deal, despite the investment the whole world made to bring it about,” said Zarif, according to excerpts of remarks reported from Caracas.

“And in the process it has not only breached the relevant [UN] Security Council resolution, but also ironically sanctioned those who try to abide by it,” he added.