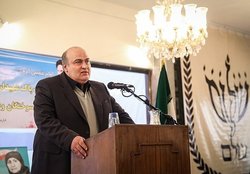 Representative of the Iranian Jewish community at the parliament Siamak Mareh Sedq condemned US’ adventurism in the Persian Gulf region, cautioning that threatening Tehran’s regional interests will have dire consequences for the interests of the US and its regional allies in a broader context.

RNA - “Any move against our economic security in the region will endanger the economic interests of all apostles of the US in the region and the Zionists,” Mareh Sedq told FNA on Saturday.

“All those who have interests in the Persian Gulf region and are after doing business in there must know that either the region is safe for everyone or no one will be able to use it safe,” he warned.

“We will never allow under any circumstances that the double standard approach undertaken by the US in areas of politics, culture, and ethics be imposed on us and will never let our national interests be eyed by Imperialism and Zionism who are after endangering our economic interests,” reiterated the lawmaker.

His remarks came after the escalation of tensions in the Persian Gulf region by the US.

Earlier on the day, Kian Khanlari, the MP representing Armenian Christians from Northern Iran, told FNA that the US has been behind the foreign tankers smuggling oil out of Iran.

“The Americans are adopting a new method in their anti-Iran campaign and that is backing oil and fuel smuggling in the region,” Khanlari told FNA today, underling that Tehran will give a crushing response to any move against its security.

He categorically condemned the US and UK adventurism in the Persian Gulf region, saying that such measures are “the dirtiest kinds” of opposition.

“In this new method, the Americans offer different kinds of support, including military backing, to smugglers to rub Iran out of its oil customers and block Tehran’s oil sale; This is exactly support for terrorism,” the lawmaker underlined.

“In this area, we are again witnessing US’ double-standard approach. While they adopt positions against economic corruption and smuggling, they are themselves supporting fuel smuggling in the Persian Gulf region,” the legislator stressed.

“Whether it is the US or the UK trying to disrupt economic and security stability of the region by this method, we will fight against it because our national interests require us to oppose such moves as every other country with national dignity will do the same,” he highlighted.

Khanlari then warned the UAE, cautioning that supporting fuel smuggling will surely damage the national interests of the other countries of the region, as smuggling will decrease the customers of these countries, too.

“After the US spy drone was shot down by the military units of our country, the Americans reached the conclusion that military options against Iran will be fruitless and futile, and accordingly they changed their tactic and started fuel smuggling in the region,” the legislator underlined.

“The Supreme Leader [of the Islamic Revolution Ayatollah Seyed Ali Khamenei] said a while ago, before the US spy drone was shot down, that there will be no war between Iran and the US, and following events affirmed that any military option against the Islamic Republic will have heavy costs which cuts the probability of war against Iran to zero and it illustrated the correctness of the Leader’s analysis,” he concluded.

The Islamic Revolution Guards Corps said on Thursday that the IRGC Navy stopped a foreign oil tanker in Lark Island in the Persian Gulf which was carrying 1mln liters of smuggled fuel from Iran.

The public relations office of the IRGC Navy's first zone issued a statement on Thursday, saying that western media reports which claim that any other vessel has been confiscated by the IRGC are rejected.

According to Fars News Agancy, it added that the ship was seized in a surprise action last Sunday during control operations and monitoring the vessels crossing the Persian Gulf with judiciary warrant South of Lark Island after the IRGC was assured that it was carrying smuggled fuel which amounted to 1mln liters.

"The ship which enjoys the capacity to carry 2mln liters of fuel was sailing with 12 foreign crews to deliver the smuggled fuel received from the Iranian dhows to foreign ships in farther areas but it failed thanks to the IRGC Naval forces' vigilance," the statement said.

It added that the ship's case is being studied by the judiciary authorities, saying that the Iranian vessels stationed in the region do not hesitate even a moment to safeguard the Iranian nation's interests and wealth and carry out their security missions and confront organized smuggling of fuel firmly and vigilantly round the clock.

The IRGC, meantime, denied claims that it has seized any other foreign ship as claimed by the foreign media in the last several days, reiterating that the ship with smuggled fuel has been the only one seized by the IRGC Navy.