Most Americans say US political debate has grown more toxic under Trump: Poll 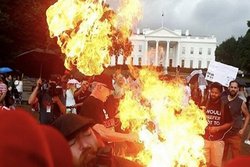 Large majorities of Americans believe the tone of political debate in the United States has become more negative in recent years and the inflammatory political rhetoric could encourage acts of violence, and President Donald Trump is a major factor in this growing problem, according to a new poll.

RNA - Some 85 percent of US adults say that political debate in the country is getting increasingly negative and less respectful, according to a survey conducted this spring by the Pew Research Center, a fact tank based in Washington, DC.

The poll found that 55 percent of Americans believe Trump has changed the tone and nature of America's political debate for the worse, while  just 24 percent say he has changed it for the better.

Republicans are considerably less likely than Democrats to report these negative reactions to Trump’s rhetoric.

Trump’s recent attacks on four female lawmakers in the US House of Representatives has triggered widespread backlash in the country.

The four legislators are all women of color and members of the Democratic Party, serving in their first term in office.

Trump triggered a firestorm this week after he tweeted that the four progressive lawmakers, known as “the squad,” should “go back” where they came from, even though all are US citizens and three are US-born.

The so-called squad are Ilhan Omar of Minnesota, Rashida Tlaib of Michigan, Alexandria Ocasio-Cortez of New York and Ayanna Pressley of Massachusetts.

Trump stepped up his vilification of four liberal female lawmakers as “un-American” at a raucous rally on Wednesday, in Greenville, North Carolina. As Trump recounted past comments by Omar, the crowd began chanting: “Send her back!”

Omar told reporters at the US Capitol on Wednesday that Trump is "spewing his fascist ideology."

"As much as he's spewing his fascist ideology on stage, telling US citizens to go back because they don't agree with his detrimental policies for our country, we tell people that here in the United States: dissent is patriotic," Omar said.