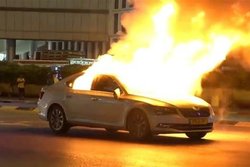 Thousands of Israelis of Ethiopian descent and their supporters staged sit-down protests at major road junctions throughout the occupied Palestinian territories after a member of the was shot dead by police.

Around 20,000 Ethiopian Jews, who trace their roots to the biblical King Solomon and the Queen of Sheba, were brought to Israel on secret flights in the mid-1980s and early 1990s. But they have at times complained of racist discrimination.

On Saturday, 18-year-old Solomon Tekah was shot dead in the northern city of Haifa by an off-duty policeman. The policeman said he drew his gun while trying to intervene in a brawl between two groups of youths, who ended up turning against him.