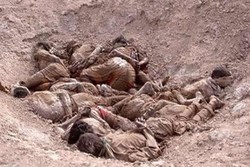 Syrian officials have discovered a mass grave containing the bodies of tens of people executed by members of the Daesh Takfiri terrorist group near the country’s northwestern city of Raqqah.

RNA - Head of Raqqah Medical Association, Jamal al-Isa, told Syria’s official news agency SANA on Tuesday that local authorities made the discovery in the al-Fukheikha agricultural suburb of the province, located about 455 kilometers (283 miles) northeast of the capital Damascus.

On October 31, 2018, Syrian government forces discovered a mass grave containing the bodies of more than 1,500 people, who had lost their lives when the US-led coalition purportedly fighting the Daesh terror outfit carried out airstrikes against Raqqah.

Isa told the pro-government and Arabic-language al-Watan newspaper at the time that the discovery was made in the Panorama district of the city, which served as the former de facto capital of the Daesh Takfiris.

"Every day, more crimes are being uncovered which were perpetrated by the Daesh terrorist group and the illegal US-led military alliance in Raqqah," he added.

The head of Raqqah Medical Association noted that the US-led coalition conducted blind bombardment on the northwestern Syrian city after Daesh terrorists withdrew, and destroyed 85 percent of it.

According to Press TV, he stressed that his colleagues had confirmed the presence of 4,000 bodies in one single grave.

Hajo went on to say that Syrian Health Minister Nizar Yazigi has ordered the formation of a committee in order to collect the remains of the victims and transfer them to a military hospital in Aleppo.

The US-sponsored and Kurdish-led militants of the so-called Syrian Democratic Forces (SDF) said on October 20, 2017 that it had “liberated” Raqqah after driving out Daesh terrorists from the city.

The so-called Syrian Observatory for Human Rights (SOHR) has, meanwhile, said that the SDF’s purported operations in Raqqah have killed civilians and damaged infrastructure in the city.

“When you’re killing around 1,200 civilians — nearly half of them women and children — and destroying 80 percent of the city, that’s not liberating Raqqah,” Rami Abdel Rahman, the head of the SOHR, once told Arab News daily newspaper.