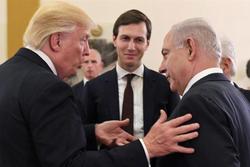 Donald Trump's son-in-law and advisor Jared Kushner represents Jewish interests in the United States that basically caused the US president to withdraw Washington from the Iran nuclear agreement, says an American writer and former professor.

RNA - E Michael Jones, the current editor of Culture Wars magazine, made the remarks in an interview with Press TV on Friday while commenting on a statement by former US Secretary of State Rex Tillerson who said that Kushner conducted diplomacy without his knowledge when he was in the administration, leading to several embarrassing incidents.

Tillerson, who was fired by Trump in March 2018, recounted the incidents during a testimony last month at the US House of Representatives Foreign Affairs Committee, according to a transcript of a congressional hearing released on Thursday.

The former top US diplomat and CEO of ExxonMobil described his frustration with Kushner conducting his own diplomacy from the White House, at times without informing the US State Department and the Pentagon.

“This is illegal according to American political system. It violates – I believe – a Logan Act. But in this instance it is going to go unpunished because the part of the story that’s not reported here is Jared Kushner is representing Jewish interests here,” Jones said.

“So the real significance of the story will be covered over by the mainstream media who were limited to the two areas of insignificance. This of course has direct relevance to Iran because it was Jewish interests that basically caused Donald Trump to abandon the Iran nuclear agreement,” the analyst noted.

“It’s Jewish interests that are once again pushing America into war in the Middle East this time with Iran,” he said.

“Donald Trump I think -- recent events have shown – that he does not want war with Iran. He is using the military power to threaten Iran,” Jones noted.