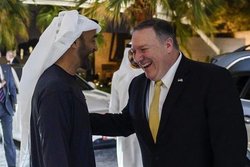 The United Arab Emirates says there is no "clear, scientific and convincing" evidence to assign blame for the recent tanker attacks off its coast in the Sea of Oman, splitting with the United States and Saudi Arabia, which hold Iran responsible for the suspicious acts.

RNA - UAE Foreign Minister Sheikh Abdullah bin Zayed Al Nahyan said Wednesday that his country was not able to pin the attacks on any country because an investigation had failed to find enough proof.

“Honestly we can’t point the blame at any country because we don’t have evidence,” bin Zayed said during a joint press conference with his Russian counterpart, Sergey Lavrov, in Moscow.

Last month, four tankers were subjected to what Abu Dhabi called "acts of sabotage" outside the tiny Persian Gulf sheikhdom's territorial waters near the Strait of Hormuz.

A joint investigation by the three countries concluded that a “state actor” was most likely behind the incident in May but stopped short of singling out any country.

Another pair of tankers -- one of them Japanese -- were attacked in the Sea of Oman earlier this month.

Bin Zayed's statements indicate the UAE's break from the official standpoint of the US and Saudi Arabia, both publicly blaming Iran for the two instances of tanker attacks without providing any evidence.

The claims by Riyadh and Washington come amid heightened tensions in the Persian Gulf region as a direct result of America's interventionist policies.

Tensions have been running high between the two countries since Trump’s decision in May last year to abandon the 2015 Iran nuclear deal and reimpose sanctions on Tehran as part of a “maximum pressure” campaign aimed at forcing it to renegotiate a new deal that addresses its ballistic missile program and regional influence as well.

The US has also sent warships, bombers and additional troops to the region in the wake of the suspicious tanker attacks in the Sea of Oman, which it has similarly blamed on Iran without providing evidence.

Iran, however, has remained steadfast on its position. The Islamic Revolution Guards Corps shot down a US spy drone last week, prompting Trump to consider and quickly back out of retaliatory strikes.

Lavrov said that Moscow would try to persuade the US and Iran to start dialogue. Iran has made it clear that it would not negotiate with the US under pressure.

'UAE wants tensions to be dialed down'

The Emirati foreign minister said that he discussed the US-Iran tensions with Lavrov to see how the maritime routes can be kept open in the wake of such "subversive operations."

According to Press TV, he asserted that the UAE did not want “more turbulence and ... more worries” in the region.

“We are in a region that is tense and important for the world and we don’t want more tension,” said Sheikh Abdullah.

The Emirati top diplomat said his country was still working with the US and other regional countries to build what he said was going to be a global coalition to protect oil shipping lanes in the region.

The remarks came a day after US Secretary of State Mike Pompeo set off on a tour of the Middle East, which included a stop in Abu Dhabi, to form a "global coalition" against Iran.

A senior State Department official said Monday that the US Navy was building a “proactive deterrence” program that would be funded by a coalition of nations that want to protect their oil tankers in the region.

Bin Zayed said the project was going to involve regional and other “(oil) exporting and importing” countries.