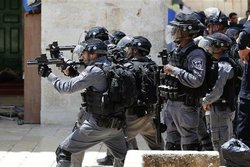 Israeli forces have opened fire on a Palestinian security headquarters in the occupied West Bank city of Nablus, injuring at least one Palestinian officer.

RNA - Nablus Governor Ibrahim Ramadan said that a group of Israeli soldiers targeted the headquarters by blockading the building and shot at it “directly and without justification,” early on Tuesday, wounding one security guard and causing property damage.

Other reports suggested two Palestinian security officials were wounded during the attack.

The Israeli military claimed that the troops had opened fire as they mistook the Palestinian security forces for “suspects” while searching the area for "terrorists."

But Ramadan dismissed the claims as fabrication and noted that the Israeli forces had opened fire on the building without justification.

“We must not remain silent before such acts. Their goal was to kill. The bullets broke the windows and hit the offices,” Ramadan said.

This attack is not the first and will not be the last, especially amidst the current serious escalation against Palestinians, their homes and land, he added.

Earlier on Tuesday, an Israeli army spokesman said that the troops had arrested some 18 Palestinians during an overnight raid across the occupied West Bank.

The Israeli army frequently carries out wide-ranging arrest campaigns across the occupied West Bank under the pretext of searching for “wanted” Palestinians.

More than 7,000 Palestinians are reportedly held in Israeli jails. Hundreds have been incarcerated under the practice of administrative detention, which allows holding Palestinian inmates in Israeli prisons without trial or charge.

Some Palestinian prisoners have even been held in administrative detention for up to eleven years.