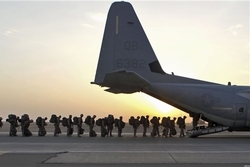 A senior member of the Iraqi parliament's Security and Defense Commission said that fresh troops have arrived at the US base in Erbil in the Iraqi Kurdistan region without Baghdad's prior knowledge.

RNA - "Fresh US combat forces have arrived at the Erbil base at an agreement with the Iraqi Kurdistan region's government and not the Federal government or the defense ministry of Iraq," Karim al-Mohammadawi told the Arabic-language al-Ma'aloumeh news website.

He added that Erbil has not informed the Federal government of the number of US forces and the number of military equipment in the region.

Al-Mohammadawi described the base in Erbil as one of the largest in Iraq, and accused the US of helping terrorists through the same base.

"Washington uses the base as a command center in the region and Iraq," he added, elaborating on the significance of the military center.

He added that over 50,000 American forces are stationed in Iraq, based on remarks by the US congress officials, and said most of these forces are deployed in Ein al-Assad airbase in al-Anbar and at the base in Erbil.

A former Iraqi legislator disclosed last week that the US had established 17 military bases in Iraq and deployed F35 fighter jets in Ein al-Assad airbase in the Western parts of al-Anbar province.

Al-Ma'aloumeh quoted Mohammad al-Dayeni as saying that Washington had set up 17 military bases in Iraq.

He added that the US had also deployed Spirit (stealth) fighter jets in Ein al-Assad, adding that the F-35 fighters which had earlier been stationed in the airbase fly on a daily basis to spy on Iran.

Al-Dayeni said that the US forces had specified 63,000 targets in and outside Iraq for attacks, including the positions of Hashd al-Shaabi (Iraqi popular forces).

Meantime, a prominent Iraqi political expert revealed late last month that Washington continued to increase the number of its troops in Iraq, warning of the US plots to make aggression against the neighboring states.

Sabah al-Akili told al-Ma'aloumeh that the number of US forces had increased in Iraq despite the general demand by the Iraqi people for their withdrawal.

He added that the US forces' attacks on Iraqi security forces indicated that they were combat forces and were not deployed for advising or training purposes.

Al-Akili underlined that expansion of Ein al-Assad airbase, extension of its runway and deployment of Patriot missile systems at the base showed that Washington intended to stay in Iraq for the long-run, specially given the reports that the US planned to use Iraq as a platform to attack the neighboring states and was, thus, sending more forces to its bases in Iraq.