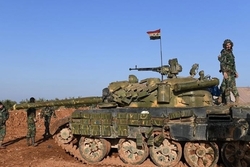 The Damascus Army aims to capture the largest stronghold of Tahrir al-Sham al-Hay'at (the Levant Liberation Board or the Al-Nusra Front) in Southern Idlib as Damascus has sent massive military convoys to continue battle against the terrorist groups in Hama, Idlib and Lattakia.

RNA - "The Syrian Army troops have now entered the Southern part of Jabal al-Zawiya strategic region after its advances in Southwestern Idlib and taking control of the town of al-Qasabiyeh North of Kafar Naboudeh," a military source said.

The Syrian Army aims to capture the largest stronghold of Tahrir al-Sham al-Hay'at in Southern Idlib as Damascus has sent massive military convoys to continue battle against the terrorist groups in Hama, Idlib and Lattakia.

A military source said that the Syrian Army troops have now entered the Southern part of Jabal al-Zawiya strategic region after its advances in Southwestern Idlib and taking control of the town of al-Qasabiyeh North of Kafar Naboudeh.

Meantime, the Syrian Army has sent a large number of its troops and military equipment to contact lines with terrorist groups in Southern Idlib and Northern Hama after new advances in over 20 regions there in the last two days.

The Damascus Army has also sent a large number of troops and military hardware to contact lines with Harasuddin, Tahrir al-Sham and Turkistani Party terrorists in Taleh al-Zaviqiat in Northern Lattakia.

Tahrir al-Sham and Islamic Turkistani Party terrorists have also dispatched military and logistical aid, including military vehicles and heavy weapons, to their militants in Jabal Shahshabou and Sahl al-Ghab in Northern Hama.

The Arabic-language website of Sputnik news agency quoted a battlefield source as saying that Tahrir al-Sham terrorists using Turkish military and armored vehicles as well as missiles armed with chemical warheads pounded the Syrian Army's military points in Tal Malh and Jabin in Northern Hama from the two axes of al-Zuka and al-Arbaeen.

The source pointed to the continued clashes in the region, and said that the Syrian Army's artillery units and air force pounded the terrorists' movements, destroying terrorists' convoy of military vehicles moving from Khan Sheikhoun in Southern Idlib towards al-Zuka in Northern Hama.

Meantime, another military source said that Tahrir al-Sham and Jeish al-Izza terrorists launched rocket attacks on the city of Mahradeh concurrent with other terrorists' attacks from the axes of al-Zuka and al-Arbaeen.

The source pointed to the tactical withdrawal of the Syrian Army from some of its military positions in al-Jabin region in Northern Hama, and said that the army has dispatched massive military equipment to the battlefronts.

Meantime, the local sources in Idlib province also said that Tahrir al-Sham and Jeish al-Izza terrorists made use of elite and foreign militants in their attack.

The ISIL terrorist group backed by the US troops stationed in al-Tanf region has heightened its movements against the Syrian Army in Eastern Badiyeh (desert) of Homs province, the Arabic-language media outlets reported.

The Arabic-language al-Mayadeen Television news network reported that the ISIL has recently increased its movements in Homs' desert region.

The intensified ISIL attacks on the Syrian Army's military positions in Eastern Homs have increased while the US-led coalition has prepared the grounds for the presence of hundreds of ISIL terrorists in the depth of Badiyeh region with the aim of exerting pressures on the Syrian Army in the military operations against the ISIL in Baqouz region in Eastern Euphrates.

Al-Mayadeen, meantime, pointed to the massive spread of terrorists in the surrounding areas of Jabal al-Bashri in Southeastern Raqqa and al-Dafineh in Southern Deir Ezzur and between Palmyra desert and Al-Sukhneh and the surrounding areas of al-Tanf in Eastern Homs, and said that the ISIL's movements have taken place in line with US' objectives to exert pressure on the Syrian Army and its allies in Syria.

According to Fars News Agancy, Syrian military expert Mohammad Abbas in an interview with al-Mayadeen pointed to the strategic importance of the area stretching from al-Tanf to Bu Kamal and al-Sukhneh, and said that by carrying out mop-up operation in that region, the Syrian army, in fact, will put an end to war in the region.

He pointed to the US logistic, political and military supports for the militants in the same region, and said that Washington is trying to make use of the notion of alternate army to cut the path used by the resistance front.

Meantime, it is believed that about 2,000 terrorists are stationed in Eastern Badiyeh of Deir Ezzur.

The Syrian Army found a large quantity of weapons and military equipment, including arms made in the US, from the former bases and hideouts of the terrorists in Quneitra province in Southern Syria.

The Syrian Army's engineering units continued their clean-up operations in al-Shahar region near Jbata al-Khashab town in Northern Quneitra and near the border with Occupied Golan and discovered two terrorists' hideouts containing large numbers of arms and military equipment there.

A military source, meantime, reiterated that discovery of weapons and military equipment in this region shows the extent of Israel's supports for the terrorist groups in Syria and its strong links to them.

Israel has no right to annex parts of West Bank