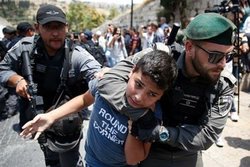 Israel has arrested some 16,500 Palestinian children since the outbreak of the Second Intifada (uprising) in late-2000, a study says.

RNA - Abdul-Naser Farwana, a Palestinian ex-prisoner and researcher at the Detainees and Ex-Detainees Affairs Commission, said in a 26-page study that during the last decade (2000-2010), at least 700 cases of arrest had been documented annually, the Palestinian Information Center reported on Sunday.

Farwana added that the number of cases made a sharp jump to 1,250 “in the last eight years.”

The second Intifada began on September 18, 2000 and was known as the al-Aqsa Intifada. It was sparked by former Israeli prime minister Ariel Sharon’s visit to the al-Aqsa Mosque complex.

Farwana further said that all facts and statistics confirmed that there was a systematic arrest policy adopted by the Israeli regime in targeting Palestinian children, and that the number of child detainees had increased steadily since 2000 and significantly since 2011.

Israel occupied the West Bank as well as East Jerusalem al-Quds during the Six-Day War in 1967. It later annexed the Palestinian city in a move not recognized by the international community.

Israel lays claim to the whole city, but the Palestinians view its eastern sector as the capital of their future sovereign state.

US President Donald Trump recognized Jerusalem al-Quds as the Israeli “capital” in December 2017 and moved the American embassy from Tel Aviv to the ancient city in May 2018, sparking global condemnations as well as protests by Palestinians.

Back in March, the UN children’s agency, UNICEF, said that around 40 children had been killed and hundreds more wounded in one year of anti-occupation protest rallies along the fence that separates the besieged Gaza Strip and the Israeli-occupied territories.

It also strongly called for an end to violence against children in Gaza and elsewhere across the occupied territories.