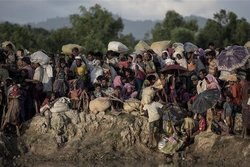 The UN says new government curbs on aid activities are affecting at least 50,000 people in Myanmar’s beleaguered Rakhine state, where persecuted Rohingya Muslims are mainly based.

The United Nations Office for the Coordination of Humanitarian Affairs (OCHA) has circulated its findings on the impact of the curbs among UN officials and non-governmental organizations.

In its findings published by Reuters on Thursday, the UN agency has expressed alarm at the escalating violence in the two Rakhine townships of Kyauktaw and Ponnagyun.

OCHA said the restrictions have forced aid organizations to reduce or stop pre-existing programs, including the provision of healthcare, clean water, school construction and teacher training.

For example, mobile health services provided in 15 villages, totaling around 17,000 people, in Kyauktaw have now been put on hold, it said.

"In Ponnagyun, around 220 health consultations in rural areas of the township have been stopped, including emergency referral services," it added.

According to OCHA, the ongoing violence has forced about 5,000 people to flee their homes and take shelter in communal areas across the region since early January.

"We are currently working to assess the impact that recent access restrictions could have on the delivery of pre-existing and ongoing humanitarian program in the affected townships,” UNOCHA spokesman in Myanmar Pierre Peron said.

The United Nations, he said, was "liaising closely with the authorities in Rakhine State, who have now invited humanitarian organizations to individually apply for travel authorizations for specific activities."

On Tuesday, the affected aid groups published a statement expressing "deep concern" about the restrictions.

"Along with most other organisations we do not currently have access to respond to the needs of the conflict-affected and displaced populations," one of them, the Norwegian Refugee Council (NRC), said.

Last week, the United Nations called on the Myanmar government to allow "rapid and unimpeded" humanitarian access to the area.

The UN investigation team reported that Myanmar's top generals should face prosecution for crimes against humanity and war crimes in Kachin, Rakhine and Shan states.

Rakhine state -- once home to hundreds of thousands of Rohingya Muslims -- has been the scene of successive rounds of violence against the Rohingya following a military crackdown in recent years.

The Rohingya, the world’s most persecuted ethnic minority, have been attacked and driven out of their homes in what the UN investigators as well as international rights groups have denounced as “an ongoing genocide”.

They have been subjected to a campaign of killings, rape, arbitrary arrests, and arson attacks by the military and Buddhist mobs, mainly between late 2016 and August 2017.

The brutal campaign forced over 700,000 Rohingya Muslims to flee their homes since August 2017 and seek refuge in neighboring Bangladesh. There, they are confined to squalid, overcrowded camps and face forced return to Myanmar.

Rohingya Muslims, who have lived in Myanmar for generations, are denied citizenship and branded illegal emigrants from Bangladesh, which likewise denies them citizenship.

Their former communities in Myanmar have been razed. Report say Buddhists have been shuttled and settled there in newly-built structures to repopulate the area.