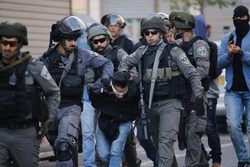 The Political Committee for Palestine in Europe called for large-scale solidarity initiatives with Palestinian prisoners in Israeli occupation jails.

RNA - The head of the committee, Abu Kareem Farhoud, warned of the simmering Israeli crimes against Palestinian prisoners, particularly in Ofer lock-up, among other prisons, Palinfo reported.

Farhoud stated that the committee has been doing its best to speak up against the ceaseless Israeli crimes against the Palestinian people and detainees and boost support for the cause.

Israeli police raided Ofer sections in last days, using dogs and attacked the prisoners with tear gas and causing over 100 cases of injuries, some of them were taken to hospitals for treatment and later returned to prison, Middle East News reported.

In reaction to their treatment, Ofer prisoners decided to refuse to accept meals and were on high alert in case of further raids by the police and prison guards.

Tension was high at all prisons in Israel on Tuesday where Palestinian resistance members are incarcerated following a large-scale Israeli police raid of sections of Ofer military prison near Ramallah on Monday, according to the Palestinian Prisoner Society (PPS).

It stressed that that prisoners throughout the country have decided to stop their daily activities, including refusing to take meals, as a solidarity step with the prisoners at Ofer.

According to the PPS, the prisoners at Ofer refused a request by the prison administration to meet with them and insisted that the administration should first life the ban on the movement of prisoners inside the jail so that they can meet and decide on a strategy for the meeting.

It noted that the prisoners at Ofer are anticipating further attempts by the prison administration to quell them, which may lead to further escalation in the confrontation.

Prisoners’ committee of the of Islamic and National Powers in Gaza announced that many prisoners are the victims of Israeli attacks and medical negligence in prisons.

The committee also warned of a Palestinian Intifada (uprising) across the Israeli prisons due to the aggressive policies committed by the Israeli Prison Service.

It also revealed that the first step to be followed in the prisoners’ combat program in Ofer is returning back meals, noting that more steps “are yet to come”.

In mid-January, hundreds of Palestinians held in Israeli jails, detention facilities, and interrogation centres are preparing to launch a mass hunger strike once Israel implements new measures that will worsen conditions for prisoners.

In a joint statement, prisoners, including administrative detainees who are held without charge, said their decision was in response to a "new level of oppression".

"These measures are a declaration of war that marks a new phase of our struggle," the statement read.

They also called on Palestinian factions and activists to stand in solidarity with them and demanded nationwide rallies.

The call to action is in response to Israel's plans to worsen what are already poor conditions for Palestinians held in its jails. Public Security Minister Gilad Erdan announced the measures last week and the Israeli government is expected to enforce the measures in the coming weeks.

One of the more "serious" changes pending approval by the Israeli cabinet, is ending the policy of separating Hamas prisoners from those affiliated with rival Palestinian faction Fatah, according to Amjad al-Najjar, Spokesperson for Hebron-based Palestinian Prisoners Club.

Other measures include rationing water supplies, blocking funds to the Palestinian Authority, reducing the number of family visits, and preventing access to jail canteens.

For the past 12 years, detainees have mostly lived off food they pay for from the prison canteen.

There, they would buy things like chicken, meat, and canned goods as an alternative to prison meals that are not enough to "sustain detainees throughout the day", al-Najjar explained, noting that "if they (Israeli Prison Service) take that away, the alternative is simply not an option".

Israel has for years held Palestinians in overcrowded prisons with poor hygiene standards which each prisoner confined to a 2.9sq-metre cell, according to Addameer.

Some of the most severe policies Palestinians are subject to include the use of isolation for punishment and medical negligence.

Every year, dozens of Palestinian prisoners are held in isolation under the pretext of "security", Lana Ramadan, Addameer's international advocacy officer, told Al-Jazeera.

"The length of time in isolation that prison officials can order extends from 12 hours … to longer periods of six months to one year," Ramadan stated.

Another major issue is medical negligence, where doctors employed by the IPS have minimal medical qualifications and are not under the authority of the Israeli Ministry of Health.

Ramadan noted that medical issues among Palestinian prisoners are widespread and range in severity from chest infections and diarrhoea to heart problems and kidney failure.

"Although all prisons include a medical clinic, physicians are on duty irregularly and specialised medical healthcare is generally unavailable," she stressed, adding that most prisoners are usually prescribed painkillers instead of being given treatment for their condition.

In the past, such conditions have forced prisoners to start open-ended hunger strikes in order to secure basic rights. At times, prison authorities would resort to force-feeding, a practice that sometimes led to the death of Palestinians.

This is not the first time Israel has tried to limit the rights of detained Palestinians, most of whom are held in jails inside Israel, in contravention of Article 76 of the Fourth Geneva Convention, which requires that an occupying power hold prisoners from an occupied land within that area.

Palestinian leaders condemn existing conditions and say the new measures are another escalation of human rights violations. Rights groups say a lot of the proposed measures are de facto in place already.

According to Nadia Hijab, director of the Palestinian policy network, Al Shabaka, the measures are a political tool for Israeli politicians who are looking to garner support in the run-up to elections.

"As [Israeli Prime Minister] Benjamin Netanyahu's Likud party heads into the election, they are no doubt seeking to show they are even tougher on Palestinians," Hijab told Al-Jazeera.

Netanyahu's government announced elections for April 9, after the ruling coalition came up short of the votes needed to pass a contentious piece of court-ordered legislation. He is also facing mounting pressure over a series of corruption investigations into his affairs.

Hijab believes that the government's aim is to drive prisoners into another hunger strike in an attempt to detract attention from Netanyahu's problems.

"They worsen conditions in order to win over the Israeli right with the hopes of securing votes," he said, adding that "they want to win elections off of the suffering of Palestinian prisoners".