US House panel to probe Saudi links to Trump's finances 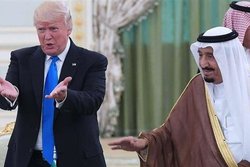 A US House of Representatives panel plans to investigate ties between the sprawling business conglomerate owned by President Donald Trump and Saudi Arabia.

RNA - A member of the House Intelligence Committee said it will aggressively investigate the links, including "hundreds" of hotel rooms Saudi lobbyists booked at the new Trump Hotel in Washington after the president's election victory.

A spokesman for a public relations company working for Saudi Arabia told The Wall Street Journal that the lobbyists were trying to stonewall a bill that allowed Americans to sue foreign governments for responsibility in the September 11 attacks.

The campaigners would offer the rooms to US military veterans, whom they would send to Capitol Hill to lobby against the bill, the Middle East Eye (MEE) news portal reported, citing veterans and organizers.

The PR firm working for Saudi Arabia spent "nearly $270,000 on lodging and catering” at the hotel, the MEE added.

Swalwell went on to say that Trump was absorbed with Saudi Arabia due to Riyadh’s satisfying of the president’s sense of self-importance.

“You have a narcissistic personality, and they’re throwing him this massive welcome ceremony, and I think we all can see, you know, why he would kind of gravitate toward them,” the congressman said.

The reception came during Trump’s first foreign visit, which he paid to Saudi Arabia of all other countries in May 2017. It saw Saudi King Salman attending a sword dance with the kingdom, and Washington signing a $110-billion arms deal with Riyadh.

The US has been the main Western patron of the Saudi-led war on Yemen. It also lends logistical support to the war, which has killed tens of thousands and raised the specter of outright famine over the already-impoverished country.

Trump has refused to downgrade the support in defiance of an international outcry. The murder in October last year of prominent US-based Saudi journalist Jamal Khashoggi has also failed to affect the US relations with the kingdom, despite allegations that Saudi Crown Prince Mohammed bin Salman ordered the killing.

Tags: US Trump Saudi
Short Link rasanews.ir/201rD4
Share
0
Please type in your comments in English.
The comments that contain insults or libel to individuals, ethnicities, or contradictions with the laws of the country and religious teachings will not be disclosed