Iran says EU 'hostage' of US, warns of 'consequences' 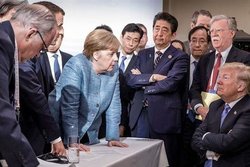 Iran has criticized the European Union for failing to set up a payment mechanism meant to circumvent US sanctions, warning that the bloc should account for the "consequences" of the delay.

The SPV or the special purpose vehicle is a virtual clearing house which the Europeans have been working on for months to process Iran-related transactions independent of the US but the mechanism has yet to see the light of the day.

So far, the Europeans have failed twice to fulfill their promises to get the system up and running in order to persuade Iran to remain in a landmark 2015 nuclear deal known as the JCPOA after the US abandoned it.

The EU first pledged to make it operational before the US sanctions went into effect in August 2018. Last month, EU foreign policy chief Federica Mogherini said she expected the instrument to be established before the end of the year but that date also passed without any explanation.

Mogherini said on Wednesday that efforts to implement the special purpose vehicle for trade with Iran will continue into 2019 but Qassemi warned that Iran's patience was running thin.

"The Europeans, as the main culprit, should consider the consequences of their decision, because Iran has so far honored all its JCPOA commitments, but ultimately there is a limit to Iran's patience. Hence, it is about time the EU made a strategic decision and chose its path," he said.

Qassemi cited "the domination of the dollar and the interconnectedness of the European and American economies" as the reasons behind the delay, state news agency IRNA reported.

"The European Union and even the three European parties to the deal with Iran are captive and hostage to the American economy, so they need to decide for their independence," he said.

Iran is already angry with the EU over its failure to stop European companies from leaving the Islamic Republic.

"European countries should pay for their independence from the United States, because doing so cannot be without costs, especially for the implementation of important historical tasks such as the SPV, which could be a major milestone for European solidarity on the global stage; so the European countries need to make a decision at this point and juncture," Qassemi said.

Qassemi said while the Europeans started with goodwill and showed a "positive political will" to set up a financial mechanism, "over time and during negotiations over the past months, they are reinforcing the impression that the European states face a series of serious disabilities in implementing the SPV."

Qassemi also touched on US Secretary of State Mike Pompeo's recent controversial claim that sanctions were aimed at giving the Iranian people a chance to have better lives.

"The US imposition of sanctions against the Iranian nation with the logic of improving their lives is hurting the sentiments of Iranians and is totally wrong.

"Hence, Pompeo should watch the mood in which he speaks. Is it possible to sanction the Iranian people and, like they [US authorities] say, exert more pressure on them in order to bring more relief to them?" Qassemi said.

US authorities, the spokesman said, "are constantly fraught with contradiction in speech, due to lack of attention, awareness, as well as their hostile policies towards Iran, and will ultimately make a laughing stock of themselves in the international community."

Qassemi further dismissed as "baseless" Pompeo's claims that Iran's launch of space rockets and missiles was a breach of UN Security Council Resolution 2231 which was issued to endorse the JCPOA.

According to Press TV, the Iranian official urged the top US diplomat to seek expert advice on the resolution, reiterating that "our missile policies are completely defensive and deterrent, do not violate Resolution 2231 and are not against any country."

"Iran is not a nation to buckle under these kinds of pressures and bow to the bullying and excessive demands of the American government. US authorities are advised to review the history and experience of past sanctions to somehow come to their senses."

Tags: EU US Iran
Short Link rasanews.ir/201rD1
Share
0
Please type in your comments in English.
The comments that contain insults or libel to individuals, ethnicities, or contradictions with the laws of the country and religious teachings will not be disclosed