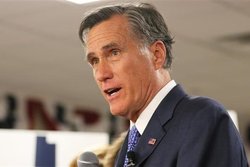 Mitt Romney, the former Republican presidential candidate and incoming US senator, has attacked Donald Trump, saying the president’s leadership and foreign policies have both failed.

RNA - Romney, who will be sworn into the US Senate on Thursday, made the scathing remarks in a Washington Post op-ed published on Tuesday evening.

The president has deserted the US’ allies and is unable to lead a “divided” nation, said Romeny, whose run for a Senate seat in Utah was endorsed by Trump in February last year.

He said the events happened last month, including the departures of Defense Secretary Jim Mattis and Chief of Staff John Kelly, are worrisome and indicate a decline for Trump's presidency.

“The appointment of senior persons of lesser experience, the abandonment of allies who fight beside us, and the president’s thoughtless claim that America has long been a ‘sucker’ in world affairs all defined his presidency down,” he wrote.

“On balance, his conduct over the past two years, particularly his actions this month, is evidence that the president has not risen to the mantle of the office,” he opined

"With the nation so divided, resentful and angry, presidential leadership in qualities of character is indispensable. And it is in this province where the incumbent’s shortfall has been most glaring," Romney added.

In an unexpected change of policy, Trump announced last month that he was going to pull US troops out of Syria because the Daesh terrorist group was already defeated and there was no reason for the US to extend military presence in the war-stricken country.

The decision was met with criticism from both Democrats and Republicans, prompting Mattis and Brett McGurk, the US special envoy to the so-called anti-Daesh coalition in Syria and Iraq, to resign.

Romney also said in his essay that “Trump’s words and actions have caused dismay around the world” and cited Pew reports that show the number of German, British, French, Canadian and Swedish people who believe Trump would “do the right thing” had decreased from 84% in 2016 to 16% in 2017.

He did say he agreed with some of Trump's policies, such as cutting taxes and deregulating the economy, but noted he would criticize “destructive statements” made by the White House.

“These are policies mainstream Republicans have promoted for years,” Romney said. “I will speak out against significant statements or actions that are divisive, racist, sexist, anti-immigrant, dishonest or destructive to democratic institutions.”

Tags: Mitt Romney Trump US
Short Link rasanews.ir/201rBw
Share
0
Please type in your comments in English.
The comments that contain insults or libel to individuals, ethnicities, or contradictions with the laws of the country and religious teachings will not be disclosed