Rasa - Marwan, a 13-year-old Palestinian boy, has been suffering the effects of trauma since being assaulted and arrested by Israeli army troops. 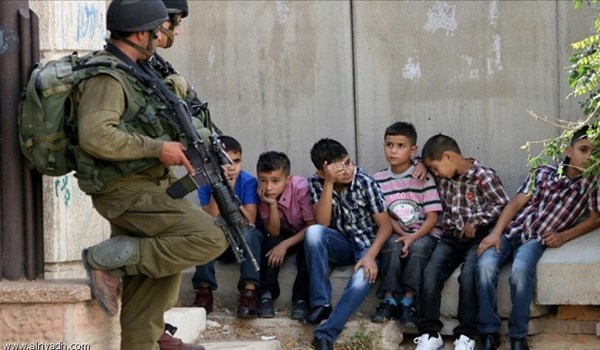 RNA - “It was almost four months ago when the Israeli army raided our home in the middle of the night, assaulted my father and arrested me,” Marwan Sharabti told Anadolu Agency.

Marwan was detained on allegations of throwing stones at Israeli soldiers.

“I told them I didn’t throw any stones, but they didn’t believe me,” he said, adding that “it wasn’t me --- it was a Jewish settler living near my home”.

Marwan is one of the five children of Mufid Sharabati, 47. They live in the Old City of Hebron in the Southern West Bank, where some 500 Jewish settlers live under the protection of the Israeli military.

The Old City is known for its tense atmosphere and the heavy presence of Israeli troops and Jewish settlers.

“I shouted, calling on my father not to let them take me, but they attacked him and whisked me off in a military vehicle,” Marwan recalled.

“In the vehicle, I was kept blindfolded for more than an hour while the soldiers insulted me,” he stated.

Since the incident, his father says, Marwan --- along with his eight-year-old brother Hamid --- has shown signs of trauma and suffers from frequent bedwetting.

“For months, I have heard my sons crying in their sleep every night,” Mufid told Anadolu Agency.

“This year was hard on my family. My wife and I, along with Marwan, have all been detained and assaulted by Israeli soldiers,” he lamented.

Ghaleb, 16, another Palestinian child, was assaulted and held for three months in an Israeli prison for allegedly throwing stones during a demonstration near the West Bank city of Ramallah.

“They detained me and stripped me naked for an hour. I was then held for long periods without food or water,” Ghaleb told Anadolu Agency.

“The soldiers kept insulting me. I was terrified. I couldn’t sleep that night. I just wanted to go home,” the boy said, adding that “I ended up spending three months in jail".

Emad, Ghaleb’s father, says his son must now regularly see a psychologist to deal with the trauma he endured while in custody.

“He frequently shouts in his sleep and wakes up terrified,” the concerned father said.

Ghaleb said he often dreams of a soldier with long arms snatching him from his bed and locking him in an underground cave, adding that “I shout and shout, but no one hears me".

According to Palestinian rights groups, the vast majority of Palestinian children detained by Israel are subjected to psychological or physical abuse.

According to the rights group, Palestinian minors are often made to sign documents written in Hebrew despite the fact that they don’t know the language.

They are also often interrogated in the absence of their parents or lawyers, according to the rights group.

Children are also often detained alongside adults, and minors frequently report being kicked, slapped and blindfolded during arrest and/or interrogation.

According to the Palestinian Prisoners Society, an NGO, 12,000 Palestinian children have been arrested by the Israeli authorities since 2000.

As of 2018, roughly 300 children continue to languish inside detention facilities across Israel.

Tags: Palestinian Israel Abuse Children
Short Link rasanews.ir/201qEZ
Share
0
Please type in your comments in English.
The comments that contain insults or libel to individuals, ethnicities, or contradictions with the laws of the country and religious teachings will not be disclosed