Why Zionist Americans are scared of Iran

Rasa - The greatest nightmare of the neo-conservative Zionist Americans who currently control the Persian Gulf is that the other countries in the region would follow independent Iran and become independent states themselves, American scholar and political analyst Dr. Kevin Barrett says. 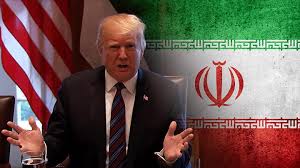 RNA - Dr. Barrett, who is an Arabist-Islamologist scholar and one of America's best-known critics of the War on Terror, made the remarks in an interview on Monday while commenting on a report which says the administration of US President Donald Trump has been quietly pushing ahead with a plan to create a NATO-like security and political alliance between Arab countries to confront Iran despite deep divisions among the Persian Gulf Arab states.

Prior to Trump's visit to Saudi Arabia last year, reports said the US president was expected to lay out his vision for what White House officials called an “Arab NATO," comprised of six Persian Gulf Arab countries, Egypt and Jordan.

The United States would play an organizing and supporting role while staying outside the anti-Iran alliance, the reports added.

“Well, there are number of problems with this. And one of them of course is that NATO is not actually an alliance of equals. It never was and it is not today,” Dr. Barrett said.

“Indeed, NATO is a cover for the US occupation of the Western Europe. Western Europe is completely occupied and Germany which is the economic engine of Europe is full of US military bases. The US has spent an enormous amount of time and energy spying on the German leadership,” he added.

“And of course Germany is also occupied psychologically by Israel which has extracted billions and billions of dollars in reparations for the so-called holocaust when in fact the biggest holocaust of World War 2 was the holocaust against Germany in which ten million Germans, the vast majority innocent civilians , were murdered under the occupation of Germany which continues today,” the analyst noted.

“So NATO has a very bad track record in Europe, and it looks like Trump wants to occupy the Middle East. Well, of course, the US has been occupying the Middle East ever since the US took over the management of Saudi Arabia from the British who created the ibn Saud Wahhabi dynasty themselves. In fact the British foreign office created the name so-called Saudi Arabia,” he stated.

“So Trump’s idea here formalizing and consolidating US domination of its puppet colonies in the Middle East -- its oils spigots – is really nothing new but is probably a kind of emergency measure, as the people of the Middle East have awakened and are demanding autonomy and control over their own destiny and resources, which means that the days that these puppet satraps like the ibn Saud family, the insanely corrupt dynasty that steals the money from their oil and stashes it in their Swiss bank accounts, totally under the protection of the US and the Zionist entity—those days are numbered,” he said.

“The people of the Middle East are going to take back their destiny. And this is a last ditch desperate attempt by the Zionist American empire to consolidate and try to firm up its control over its puppets before those puppets fall. But it won’t be long before they do fall. The Middle East will soon get back its autonomy, get back its own resources. That’s really is what this whole issue is about,” the scholar said.

“The problem with Iran is that Iran is an independent country, and the greatest nightmare of the people who currently control the [Persian] Gulf is that the other countries would follow suit and become independent states themselves. So this is what it is really about: The last gasp of neo-liberalism and neo-colonialism in the Muslim East,” Dr. Barrett concluded.

Tags: US Iran Zionist Trump American
Short Link rasanews.ir/201qB4
Share
0
Please type in your comments in English.
The comments that contain insults or libel to individuals, ethnicities, or contradictions with the laws of the country and religious teachings will not be disclosed