Imam Husayn continues to shout ‘disgrace is far away from us’

Rasa – Archbishop Mikhail Abras stated that Imam Husayn is considered as a saint of Islam and said, “Imam Husayn continues to shout ‘Hayhat Minna al-Dhilla’ (‘disgrace is far away from us’).’” 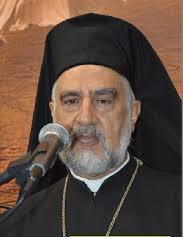 RNA – Speaking at a ceremony in commemoration of Imam Husayn which was organized by Amal Movement in the Lebanese town of Jabal, Archbishop Mikhail Abras, the Greek Catholic Melkite Metropolitan of the southern Lebanese city of Tyre, said, “Ashura must not be transformed into a ceremony which merely commemorates the memory of Imam Husayn and a ceremony where we don’t learn from its lessons for the present and future. When our relationship with God is at stake, all matters will turn into secondary issues and this is what Imam Husayn presented and was martyred on the path of religion.”

The Lebanese Christian cleric added, “To those who say why do they [Shi’ahs] hold mourning ceremonies on these few days and cry for Imam Husayn and the tragedy which befell him, we say that the life, words and resistance of ‘Abu Abdillah’ are completely unparalleled and all the believers must keep his memory alive in their hearts and souls.”

Archbishop Abras said, “We call on all the scholars, human rights advocates, warriors against tyranny and oppression, as well as those who around the world who are continuing on this path until they achieve martyrdom, to give special consideration to the important speeches of Imam Husayn on Ashura and regarding his movement because they are unique in history and they do not belong to Muslims but rather to all of humankind.”

He stressed that Imam Husayn’s movement sowed the seeds of the revolution of humanity, truth and justice against injustice and corruption and stressed, “This is a revolution which doesn’t recognize surrender in order to achieve its goals.”

Referring to the fact that the fruits of Imam Husayn’s movement will reach all future generations until the Day of Judgement, His Eminence said, “The war that the Islamic Resistance has accomplished and which has humiliated the enemies is the result of the golden equation of the army, the nation and the Islamic Resistance and protects Lebanon against the volcano of war.”

Archbishop Abras stressed, “We Christians believe that believers will be martyred on the path of the interests of believers and Imam Husayn, as one of the saints of Islam, achieved martyrdom because the memory of him will remain forever.”

The Greek Catholic Melkite Metropolitan of Tyre commemorated the day of the martyrdom of Imam Husayn as a day of general mourning for humanity and as a demonstration of assistance in the tradition of Imam Husayn, and said, “Imam Husayn remains alive from the past until today and will remain alive in the future in the conscience of the ummah and [Imam Husayn] still shouts the slogan of ‘Hayhat Minna al-Dhilla’ [‘disgrace is far away from us’]. This Imam is the defender of the oppressed and whoever chooses his path hasn’t made a mistake in any manner.”