Millions of Americans mired in poverty despite US economic recovery

Rasa - More than 50 million Americans -- a sixth of the US population -- live in districts that are mired in a “deep ongoing recession”, with rising unemployment and a shrinking business base, according to a new study that underscores the uneven nature of the US economic recovery. 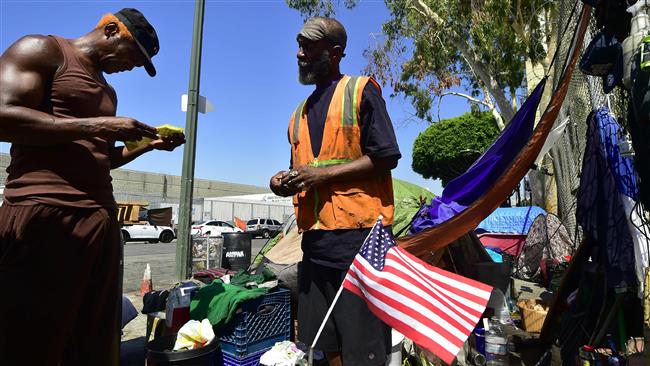 RNA - One in six Americans resides in a “distressed community” in which the local population has low median income, poor labor force participation, high levels of poverty and low educational achievement, according to research from the Economic Innovation Group (EIG), a Washington-based think-tank.

The research highlights profound economic divisions, even at a time when the US is in its third-longest economic recovery on record and when median incomes have seen the strongest two-year growth in modern history.

"The prime years of the national economic recovery bypassed many of America's most vulnerable places altogether," the report said. "Far from achieving even anemic growth from 2011 to 2015, distressed communities instead experienced what amounts to a deep ongoing recession."

The country’s affluent communities are enjoying “a spectacular degree of growth and prosperity,” yet in the poorest areas, “what little economic stability exists is quickly eroding,” the research finds.

“Not only is the gap large, but the trajectories are moving in opposite directions,” said John Lettieri, co-founder of EIG. “This is not what you would expect in a true national recovery.”

"Economic inequality in America translates into opportunity gaps for too many communities," said Steve Glickman, executive director of EIG.

States in the Southern US, including Arkansas, Alabama, Louisiana and Mississippi, account for more than half the population in distressed communities, the study says.

The problems in distressed communities have not developed overnight; most have endured zero net gains in employment and business creation since 2000, the report finds.

Some of the country’s most economically successful states also suffer from severe levels of deprivation. Over 22 percent of the population of Texas lives in distressed communities.

Tags: US Poverty American
Short Link rasanews.ir/201oZ1
Share
0
Please type in your comments in English.
The comments that contain insults or libel to individuals, ethnicities, or contradictions with the laws of the country and religious teachings will not be disclosed