Rasa – Archbishop Louis Raphaël I Sako said that when an American citizen dies, the US makes a big deal but when thousands of people die in the Middle East, the Americans’ consciences are silent. 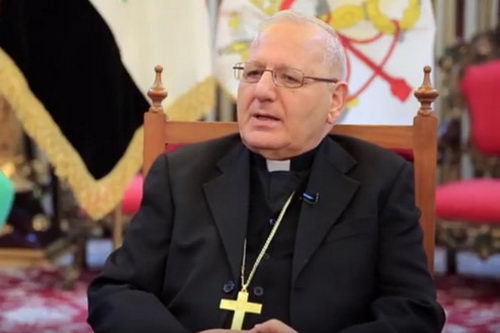 RNA – In a meeting with the media, Archbishop Louis Raphaël I Sako, the head of the Chaldean Catholic Church and the head of the Middle East Council of Catholic Churches, said that he spoke via telephone to one of the institutes affiliated to the Vatican in regard to the American President Donald Trump’s recent ruling limiting refugees from the several Middle Eastern and predominantly Muslim countries from entering the United States and limiting those accepted to Christians and banning all Muslim refugees.

The Chaldean Catholic Patriarchate of Babylon said that this decision isn’t a wise decision given the current situation in the Middle East and added, “The US should treat asylum seekers based on human dignity and not on the basis of religion.”

He explained, “Yes, the Americans have the right to maintain their security and borders, but this decision is discriminatory and is a trap for Christians because both Christians and Muslims in the Middle East are oppressed and have had their rights violated by [Takfiri] terrorists.”

Archbishop Sako added that if Christians in this region have suffered, Shi’ah and Sunni Muslims have endured even more suffering and almost about three and a half million Muslims have been displaced from their homes but Christian immigrants welcomed Muslim refugees and rented houses to them via the church.

His Eminence added that Trump’s decision is dangerous for Middle Eastern Christians because on the one hand, countries such as Iraq would be emptied of Christians and on the other hand, it’s possible it may cause tensions between Christians and Muslims.

“For this reason, I was surprised with Trump’s decision,” he stated.

The Chaldean Christian cleric said that Western policies are based on their own interests and benefits and in the case that they were based on humanity and human progress, these wars and massacres would have ended.

“My question is why when an American citizen dies, the US makes a big deal but when thousands of people die in the Middle East, the Americans’ consciences are silent while there should also be ethics in politics,” he said.

In other remarks, Archbishop Sako said that the actions of the Shi’ah sources of emulation are reassuring and that he is hopeful that a moderate atmosphere between Christians and Muslims will prevail and that we can listen to and accept each others’ words.

Archbishop Sako added, “I’ve met with Grand Ayatollah [Sayyid Ali] al-Sistani and our meeting was friendly and simple and I’ve also met with other Sunni clerics and Shi’ah sources of emulation and we are constantly in touch.”

Tags: Chaldean Archbishop Louis Raphaël I Sako Louis Raphaël I Sako christianity Sako Roman Catholic Catholic Iraq Islam and Christian relations Christians Christian
Short Link rasanews.ir/201nE5
Share
0
Please type in your comments in English.
The comments that contain insults or libel to individuals, ethnicities, or contradictions with the laws of the country and religious teachings will not be disclosed