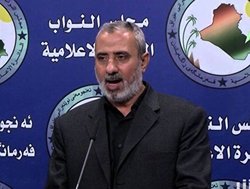 Hasan Salem condemned US police violence against protesters and called on international ‎organizations to intervene in the protests.‎

RNA – Hasan Salem, a representative of the Asa’ib Ahl al-Haqq, a part of the Popular ‎Mobilization Forces, in the Iraqi parliament, issued a statement in which he strongly ‎condemned the police violence against protesters in Minneapolis, Minnesota following the ‎police murder of George Floyd, a 46-year old African-American man, by Derek Chauvin, a ‎white Minneapolis police officer, on May 25, 2020.‎

Chauvin knelt on Floyd’s neck for 8 minutes and 46 seconds, with 2 minutes and 53 seconds ‎of that occurring after Floyd was unresponsive. This violent act prevented him from ‎breathing and eventually led to his death.‎

After Floyd’s death, demonstrations and protests in the Minneapolis-Saint Paul area were ‎initially peaceful on May 26, but later that day evolved into riots as windows were smashed ‎at a police precinct, two stores were set on fire, and many stores were looted and damaged. ‎

The release of the images has sparked outrage and protests in New York City, Atlanta, ‎Charlotte, Denver, Los Angeles, Phoenix, Richmond, Virginia, and Washington, D.C. and ‎other cities since yesterday.‎

Salem said American police used extreme and deadly violence against peaceful protesters in ‎Minnesota and that the human rights of the protestors were being violated by the United ‎States, which claims to be a champion of human rights.‎

Addressing US Secretary of State Mike Pompeo, Salem said, “Oh Pompeo, where are your ‎human rights? Does your democracy allow the killing of peaceful protesters?”‎

The Iraqi representative then called on the United Nations and human rights organizations to ‎take immediate action to stop “the US police’s crimes” against protesters demanding their ‎rights and the elimination of racism against African-Americans.‎

Iran by far outpaces US in fight against COVID-19

No moral responsibility involved in America’s dealings with Iran: Writer