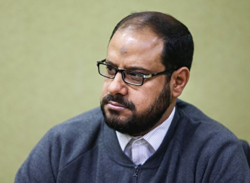 RNA – An Arabic-language video conference was held entitled “Institutionalizing the ‎‎Normalization of Relations: The Insistence of the Arab Rulers and the Opposition of the ‎‎Nations” at the headquarters of Rasa News Agency in Qom.‎

Prominent figures from the Arab world, such as Dr. Ahmad al-Sa’adi, the director of the ‎‎Islamic and Strategic Research Centre of Martyr Fadhil from Iraq, Professor Abdul-‎Ghani al-‎Khanjar, the representative of the Haqq Movement for Liberty and Democracy ‎in Bahrain, ‎and Shaykh Dr. Maher Abdul-Razzaq, the head of the Sunni Reform and ‎Unity Party, ‎participated in the webinar. They examined important issues, including the ‎normalization of ‎relations between some Arab countries through the production of ‎Ramadhan serials on the ‎subject of institutionalizing normalization with the Zionist ‎occupying regime.‎

Professor Abdul-Ghani al-Khanjar, a representative of the Haqq Movement for Liberty and ‎Democracy in Bahrain, said, “While we’re on the eve of International al-Quds Day, the filthy ‎Israeli-American-Saudi axis is trying to finalize the ‘Deal of the Century’ and normalize ‎relations between the Arab countries and the Zionist regime.”‎

He said, “Some Arab countries, including Bahrain, Saudi Arabia, the United Arab Emirates and ‎Oman, have shamelessly and openly trying to normalize relations with the Zionist regime, ‎seeking to defeat the resistance of Muslim people and the stability of the Islamic Resistance ‎Axis.”‎

Professor al-Khanjar emphasized, “The Islamic and Arab people, the elites and the ‎Palestinians don’t accept the Deal of the Century and support the slogan of the Islamic ‎Resistance Axis of this year’s International al-Quds Day, ‘al-Quds: The Path of the Martyrs’ ‎and the Arabic hashtag ‎القدس_درب_الشهداء‎ because the goal of the Islamic Resistance Axis ‎is to liberate and return al-Quds to its original owners.”‎