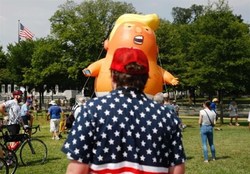 Former US Secretary of State Hillary Clinton has urged Americans not to listen to President Donald Trump’s advice amid the coronavirus pandemic.

RNA - Trump’s 2016 contender took to Twitter Tuesday as his critics blamed him for his confusing press briefings and networks were urged not to report his statements about the fast growing pandemic.

“Please do not take medical advice from a man who looked directly at a solar eclipse,” she said, referencing his removal of his protective glasses during an August 2017 eclipse and looking up at the sky.

Please do not take medical advice from a man who looked directly at a solar eclipse.
— Hillary Clinton (@HillaryClinton) March 24, 2020

The country has reported more than 100 deaths in a single day for the first time and the death toll has passed 500 with more than 41,000 infected.

“There will be no normally functioning economy if our hospitals are overwhelmed and thousands of Americans of all ages, including our doctors and nurses, lay dying because we have failed to do what’s necessary to stop the virus,” Republican Rep. Liz Cheney tweeted on Tuesday.

Former Food and Drug Administration chief Dr. Scott Gottlieb has also warned that as long as the virus continues to spread in major US cities a functional economy is unlikely.

THREAD: There’s a strong and understandable desire to return to better times and a functioning economy. But it should not be lost on anyone that there's no such thing as a functioning economy and society so long as covid-19 continues to spread uncontrolled in our biggest cities.
— Scott Gottlieb, MD (@ScottGottliebMD) March 24, 2020

“The only way to return to a stable economy and restore our liberty, is to end epidemic spread of COVID-19. We need a massive effort to offset the hardship of these efforts, and the public health costs they impose, as there are more than economic costs to the measures we're taking," Gottlieb said. "But there's no functioning healthcare with hospitals overwhelmed, no return to work with people terrified of a virus raging uncontrolled. There are two ways to end this. Let a vast swath of people catch COVID which is unthinkable, or break the epidemic. We must choose the latter.”

In a Fox News virtual town hall, Trump voiced hope that the economy would improve for the country to be “opened up” by Easter.

“You can destroy a country this way, by closing it down, where it literally goes from being the most prosperous,” the US president said. “I would love to have the country opened up and just raring to go by Easter.”

This is while, the stock market has plummeted and unemployment is expected to skyrocket.

Intentionally spreading coronavirus in US amounts to terrorism: Justice Dept.

Pentagon warns coronavirus outbreak could last for months in US

The Empire has no masks

Poll: 60% of Americans Don’t Trust What They’re Hearing from Trump About Coronavirus