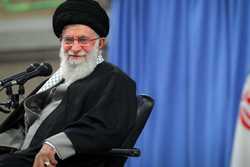 The Supreme Leader approved a proposal to grant an amnesty to a large number of Iranian prisoners on the occasion of the Muslim festive days in the lunar month of Rajab and also the Norouz festival.

RNA – The Supreme Leader of the Islamic Revolution, Ayatollah Sayyed Ali Khamenei, approved a proposal to grant an amnesty to a large number of Iranian prisoners on the occasion of the Muslim festive days in the lunar month of Rajab and also the Norouz festival, according to al-Ahed News.

Ayatollah Khamenei agreed on Tuesday to pardon or commute the sentences of eligible Iranian convicts upon a proposal from Judiciary Chief Hujjat al-Islam Sayyed Ebrahim Raisi, who had requested Ayatollah Khamenei’s clemency for prisoners with specific conditions.

The amnesty was granted in honor of Eid al-Mab’ath – the anniversary of the day Prophet Muhammad was chosen as God’s messenger, the birthday of Imam Ali – the first Shi’ah Ayatollah, and Norouz, which marks the beginning of the new Iranian year.

Article 110 of the Constitution grants the Leader the right to pardon or reduce the sentences of convicts upon a recommendation from the head of the Judiciary.

In his request, Hujjat al-Islam Raisi asked Ayatollah Khamenei to approve of the clemency considering the need to reduce the population of prisons, help the inmates to reintegrate into the society, and minimize the negative impacts of imprisonment on the families of the inmates.

The status of conviction of the eligible prisoners to whom the Leader’s clemency applies must be finalized until March 18, 2020.

The new clemency would apply to a large number of inmates, including those who have been sentenced to more than 10 years in prison and have remained behind bars for at least half the sentence period.

The clemency, however, does not apply to certain types of convicts, including those who have been sentenced for their role in the armed smuggling of narcotics, arms trafficking, kidnapping, acid attacks, rape, armed robbery, bribery, embezzlement, counterfeit money forgery, money laundering, disruption of economy, and smuggling of alcoholic drinks.

Tags: Khamenei Iran Norouz Rajab Prison
Short Link rasanews.ir/201sye
Share
1
Please type in your comments in English.
The comments that contain insults or libel to individuals, ethnicities, or contradictions with the laws of the country and religious teachings will not be disclosed