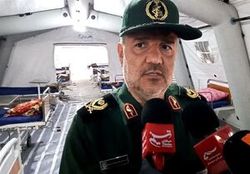 Commander of the Islamic Revolution Guards Corps Navy’s Medical Unit Brigadier General Seyed Ali Mousavi Jazayeri underlined that all hospitals of the force are prepared to render service to coronavirus patients, adding that 3 makeshit hospitals have also been established by the IRGC Navy across Iran.

“The IRGC Navy has 14 medical centers in cities across the country, including 5 city hospitals, 2 surgical operation hospitals and 7 clinics and surgery centers which are giving service to people in different parts of the country,” General Jazayeri said on Tuesday.

He added that all normal hospitals of the IRGC Navy in cities have been isolated and are treating the coronavirus patients.

General Jazayeri said that three field hospitals with over 100 beds have been set up by the IRGC Navy in the three provinces of Gilan, Hormozgan and Bushehr at the demand of the health ministry for the patients infected with COVID-19 virus.

According to the latest reports, the novel coronavirus, officially known as COVID-19, has infected nearly 183,000 people in the world, claiming more than 7,200 lives.

Last Wednesday, the Iranian foreign ministry declared that despite Washington’s claims of cooperation to transfer drugs to Iran via the new Swiss-launched payment mechanism, the US is troubling the process amid the coronavirus outbreak in the country.

Although US claims that medicines and medical equipment are not under sanctions, they have practically blocked the transfer of Iran’s financial resources in other countries into the Swiss Humanitarian Trade Arrangement (SHTA), Iranian Foreign Ministry Spokesman Seyed Abbas Mousavi said.

Health Minister Saeed Namaki announced earlier this month that a new national mobilization plan would be implemented across the country to fight against the coronavirus epidemic and more effectively treat patients.

Namaki said that the number of medical laboratories to test coronavirus infection has reached 22, and will increase to 40 soon.

Rouhani rejects rumors about lockdown in Tehran, other cities

Anti-coronavirus health recommendations compulsory for everybody

Iran’s Armed Forces to Ramp up Efforts against COVID-19