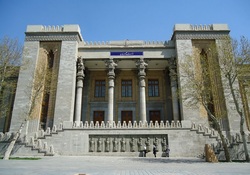 The Iranian Foreign Ministry summoned on Saturday the Swiss Ambassador to Tehran Markus Leitner, whose country represents American interest in Tehran, over US President Donald Trump’s “unfounded” remarks that implicated the Islamic Republic in attacks on a coalition base in Iraq.

RNA - “Swiss Ambassador to the Islamic Republic of Iran Markus Leitner was summoned to the Iranian Foreign Ministry on Friday afternoon to receive an official note of protest regarding Donald Trump’s baseless remarks that the Islamic Republic of Iran was responsible for the attack on coalition forces in Camp Taji,” Iranian Foreign Ministry Spokesman Seyed Abbas Mousavi said this morning.

“At the meeting, the Swiss envoy was told that instead of baseless accusations, Trump should accept the US misguided policies toward the illegal presence of his troops in the region and killing Iraqi commanders and soldiers which have been the main cause of the Iraqi people's hatred of the United States,” the diplomat added.

“The meeting underscored that the US wrong policies in Iraq are causing the current tensions and that US officials, particularly Trump, cannot shirk this responsibility by baseless and dangerous statements,” he noted.

“The Swiss ambassador was also warned of any unwise action by the US and its consequences,” the Iranian foreign ministry’s mouthpiece said.

Earlier on Friday, Mousavi denounced Washington’s irresponsible behavior in the region and the risky actions of the American military, advising President Trump to put an end to the US army's illegal military presence in Iraq.

In reaction to Trump's remarks about the recent attacks in Iraq, Mousavi said that Trump should review the presence and behavior of his troops in the region instead of risky actions and baseless accusations.

“The US cannot blame others for the consequences of its illegal presence in Iraq and the reaction of Iraqi people to the assassination and killing of their commanders by escaping forward,” said the diplomat.

“Instead of risky actions and baseless accusations, Trump should thoroughly review the presence and behavior of his troops in the region and strongly avoid projection and accusations to justify irrational behavior and escaping responsibility,” he added.

In a statement, Pentagon said the US conducted defensive precision strikes against Kataib Hezbollah facilities across Iraq.

"These weapons-storage facilities include facilities that housed weapons used to target the US and coalition troops," it said.

The US Department of Defense (Pentagon) confirmed in a statement on Friday that airstrikes have targeted Iraqi Hezbollah bases in response to rocket attacks on al-Taji camp in Northern Baghdad.

The bombers struck the Iraqi - Syrian border areas after a US-led coalition base in al-Taji was targeted by 19 Katyusha rockets Wednesday night, 30 kilometers North of Baghdad.

According to the latest reports, four US and British troops were killed and four others were wounded in the attack.

The Iraqi Interior Ministry's Security Media Cell announced in a statement that “at 01:15 local time on Thursday (2215 Wednesday) an American aerial bombardment struck headquarters of Hashd al-Sha’abi, emergency regiments as well as commandos from the 19th Division of the army.”

The statement added that the airstrikes targeted positions in Jurf al-Nasr town, located about 60 kilometers southwest of the capital Baghdad, Musayyib town in the central province of Babil, the holy shrine city of Najaf as well as the ancient central city of Alexandria.

The US military did not estimate how many people in Iraq may have been killed in the strikes, which officials said were carried out by piloted aircraft.

US Defense Secretary Mark Esper, in a Pentagon statement detailing the strikes, cautioned that the United States was prepared to respond again, if needed.

“We will take any action necessary to protect our forces in Iraq and the region,” Esper said.

Separately, an Iraqi official said an airstrike had hit an airport under construction in the holy city of Karbala, located about 100 kilometers (62 miles) southwest of Baghdad.

The official, speaking said on condition of anonymity, told Arabic-language al-Sumaria television network on Friday that US military aircraft fired three missiles at the airport building, which is located in near al-Haidariya district and near the border with neighboring Najaf province.

He added that the air raid killed a worker, and left great material damage at the site.

Meanwhile, CNN, quoting a US military official, reported that the airstrikes were carried out against five weapons storage facilities.

According to Fars News Agency, the early Friday US airstrikes were carried out about 24 hours after at least 18 PMU fighters were killed in air raids targeting an area southeast of the city of al-Bukamal in eastern Syria and near the border with Iraq.

Anti-American sentiment has been running high in Iraq following the assassination of Lieutenant General Qassem Soleimani, the commander of the IRGC's Quds Force, along with the deputy head of the Iraqi Popular Mobilization Units (PMU), Abu Mahdi al-Muhandis, and their companions in US airstrike authorized by President Donald Trump near Baghdad International Airport on January 3.

On January 8, Iran's Islamic Revolution Guards Corps (IRGC) fired a number of ballistic missiles at Ain al-Asad air base, which houses US troops in Iraq’s western province of Anbar, in retaliation.

Two days after the US attack, Iraqi lawmakers unanimously approved a bill demanding the withdrawal.

The 78-year-old politician said that Iraq rejects violation of its sovereignty, particularly the US military's violation of Iraqi airspace in the airstrike that assassinated General Soleimani, Muhandis and their companions.