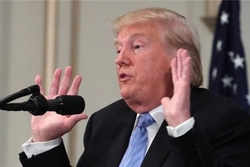 A former director of the US Office of Government Ethics has slammed the Trump administration for launching a misinformation campaign about the coronavirus epidemic.

RNA - The Trump administration is lying about the dangerous respiratory disease caused by the novel coronavirus labeled as COVID-19, Walter Shaub pointed out in a tweet on Tuesday.

Meanwhile, as more and more cases and deaths caused by virus continue to be reported across the globe US President Donald Trump appointed his Vice President Mike Pence to head the administration's coronavirus task force.

Shaub slammed the government for its incompetence in testing and informing the public.

Shaub also cencured Pence's  appointment as an unbearable move that would only hinder any real efforts to tackle the epidemic.

It can't be emphasized enough how insane it is that officials trying to lead the national response to a global pandemic have to wrangle with this nonsense. The corruption, stupidity and arrogance of the man in charge and his goofy team are unbearable.https://t.co/xcOZOKuFuE

In the meantime, top US immunologist and expert on infectious disease, Dr. Anthony Fauci,warned that the coronavirus outbreak in the US "could be really, really bad."

I do not think "we are going to get out of this completely unscathed" he said In an interview with Politico published on Tuesday.

"I think that this is going to be one of those things we look back on and say boy, that was bad," Dr. Fauci, who is on the coronavirus task force, noted.

"A vaccine could be ready “at the earliest [in] a year to a year-and-a-half, no matter how fast you go,” said Fauci, who is also the head of the National Institute of Allergy and Infectious Diseases. Fauci later said a corona vaccine could take up to two years.

Trump has been blamed by lawmakers on Capitol Hill for the threat caused by the virus.

Tensions over fast-spreading coronavirus escalate in US

All US wars are based on Big Lies and deception

Trump hails pact with Taliban, vows to meet with leaders of militant group