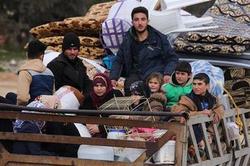 Turkey is trying to have NATO support its acts of aggression against Syria by using the issue of refugees as a bargaining chip, an American scholar says.

RNA - Speaking to Press TV on Saturday, Kevin Barrett said at a time when NATO and the United States, its biggest member, have given up on their “regime change” ambitions against Damascus, Turkish President Recep Tayyip Erdogan was trying to rally the alliance behind his project of “keeping this anti-Syria war going.”

Also on Saturday, Erdogan said he had opened the Turkish borders for migrants to cross into Europe, claiming that Ankara could no longer handle Turkey-headed Syrian refugees.

Observers, however, rule out the likelihood that the continent, which contributes the biggest number of NATO’s member states, would validate Turkey’s “psychological warfare” amid the prospect of the alliance’s confrontation with Russia in Syria, which backs the Arab country against militant and terrorist outfits.

They, meanwhile, remind that Turkey’s patchwork foreign policy, which has seen it switching sides at short notice, and its failure to reign in militants and terrorists in Syria, as Ankara has agreed to do, has damaged its credibility in the eyes of Europe.

Barrett also said, “NATO is thus far responding quite coolly [to Ankara’s efforts to push it into Syria], and the reason is that NATO understands that Turkey’s violation of these deals is the reason that things have come to this point.”

Turkey began interfering in Syria in late 2016 under the pretext of contributing to an all-Syria ceasefire. It then entered two frameworks of Syria-focused negotiations.

In the Kazakh capital of Astana, it agreed to help monitor a number of de-escalation zones across Syria, including in part of the northwestern province of Idlib. Ankara, however, has been accused of lax commitment to the deal by failing to disarm Takfiri terrorists in the Idlib zone, and giving support to a number of anti-Damascus militant groups there.

Under another deal reached in 2018 known as the Sochi agreement, a small number of Turkish forces were allowed to man observation posts on the Syrian territory to supposedly reinforce de-escalation. Turkey has, nevertheless, sent thousands of troops and heavy military hardware into Idlib in an unprecedented incursion to back the militants.

Barrett reminded in that context that “Turkey has intervened forcefully in favor of the very forces that it had promised in its agreements to try to separate out and disarm.”

Damascus has blasted Ankara for using the observation posts to lend support to the militancy. It has been forced to act against incessant violations of the de-escalation regime in the province, and has vowed to win back every inch of the Arab country’s soil.

Most recently, Ankara said a Russia-backed Syrian operation had been followed by the death of dozens of Turkish troops in Idlib.

The country’s United Nations representative Feridun Sinirlioglu raised the issue of the reported fatalities at a Friday emergency UN Security Council meeting only to be told by his Russian counterpart that the troops had been killed outside their designated observation posts.

Vasily Nebenzya said Turkish troops shared coordinates with Russia, which were then given to Syrian government forces, to avoid conflict on the ground. However, "the coordinates conveyed yesterday did not mention the areas where ultimately the Turkish soldiers died," the envoy said.

The Russian official also said Syria had a right to fight terrorism everywhere. “In response to the ongoing violations of the ceasefire regime within the zone of Idlib, the Syrian army certainly has the right to respond and suppress terrorists," he stated.

The Turkish administration has, however, been demanding that Russia “stop” the Syrian advances, while also asking the US controversially to deploy Patriot missile batteries near the Syria border to be used against the Russia-backed Syrian soldiers.

On Thursday, Syria’s UN Ambassador Bashar al-Ja’afari warned against attempts at turning the Security Council into a platform used for enabling NATO support for the Turkish aggression against Syria.

The American pundit added, “One understands why NATO, at least Europeans, does not jump into this and join in Turkey’s war on Syria.”

He noted that Turkey’s agitation aimed at escalating the situation in Syria came at a time when “the Europeans have no stomach for this war [or] the Americans right now, with [US President Donald] Trump’s re-election campaign, in which he is posing as a guy who wants to end the wars.”

“Erdogan’s got a losing hand, and he should have folded. He should have found a way to negotiate, when it became clear that his [militant] allies were not respecting the ceasefire,” Barrett concluded.

Syria condemns US, Turkey for 'illegal infiltration' of officials into Idlib