US facing another Vietnam exit scenario in Afghanistan: Analyst 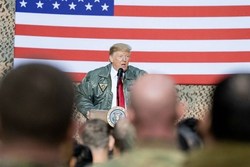 The current situation in Afghanistan is very similar to what transpired in Vietnam prior to the US withdrawal, says Professor Dennis Etler, an American political analyst who has a decades-long interest in international affairs.

RNA - Etler, a professor of Anthropology at Cabrillo College in Aptos, California, made the remarks in an interview with Press TV on Thursday while commenting on a statement of US President Donald Trump who said that it is time to end America's longest war in Afghanistan and come home.

Trump told reporters on Tuesday in the New Delhi that he is ready to sign a peace deal with the Taliban in Afghanistan if a temporary truce holds.

He said that the US and Taliban are “pretty close” to sign the deal.

The US and Taliban have agreed to sign the deal on February 29 in the Qatari capital, Doha, following the one-week partial truce. The deal will be finalized only if a week-long cessation of hostility holds in Afghanistan.

Etler said that “Trump is attempting to use talk of a US withdrawal from Afghanistan to buttress his electoral base prior to the launch of his presidential re-election campaign. His electoral base is firm but he still needs to consolidate his support among independents and Trump democrats.”

“He has, therefore, tried to hype the first phase US-China trade deal as a great victory, when it is seen by most commentators as a holding action, portray the US economy as in the best shape ever, even though the rich are getting richer while the poor are getting poorer, and that everything else is ‘under control,’ when in fact the entire government is spinning out of control,” he stated.

“As regards to Afghanistan, the current situation is very similar to what transpired in Vietnam prior to the US withdrawal. The US finally gave up the ghost and conceded the fact that its war in Vietnam was a futile effort. The same has now happened in Afghanistan,” he added.

“But only time will tell whether or not a truce will hold long enough for the US to leave. Trump's track record does not bode well. He has reneged on most of his promises throughout his tenure in office and his word cannot be trusted,” he noted.

“The proof is in the pudding. The likelihood is that Trump is using talk of a US troop withdrawal as a political ploy. It is extremely doubtful that anything will come of it,” the analyst concluded.

All US wars are based on Big Lies and deception

US, Taliban Apparently to Sign Agreement in Absence of Afghan Gov’t

Trump lashes out at Democrats over coronavirus criticism: 'This is their new hoax'

'It's Shameful': Trump Lambasted for Coronavirus Response by Pelosi